CES 2016: Google and Lenovo to Bring 3D Mapping to Mobile

On Thursday during CES, Google and Lenovo announced their plans to bring 3D mapping to smartphones. Lenovo will manufacture and sell the first phone designed to implement the ambitious goals of Google’s Project Tango, which aims “to give mobile devices a human-scale understanding of space and motion.” Qualcomm will provide the Snapdragon processor chips. Google and its partners have been busy developing cameras, sensors and software specifically designed for real-time 3D mapping. The currently unnamed handset is slated to launch this summer for under $500.

While few additional details were offered, the Lenovo phone is expected to be less than 6.5 inches in size.

At CES, Google’s Johnny Lee, project lead on Tango, “compared the technology to the addition of GPS to phones, saying that few realized how essential that offering would eventually become, thanks to apps such as Google Maps,” notes MarketWatch. “Lenovo and Google created an app incubator program that will fund and support the development of apps, with virtual reality and augmented reality specifically mentioned as a focus.” 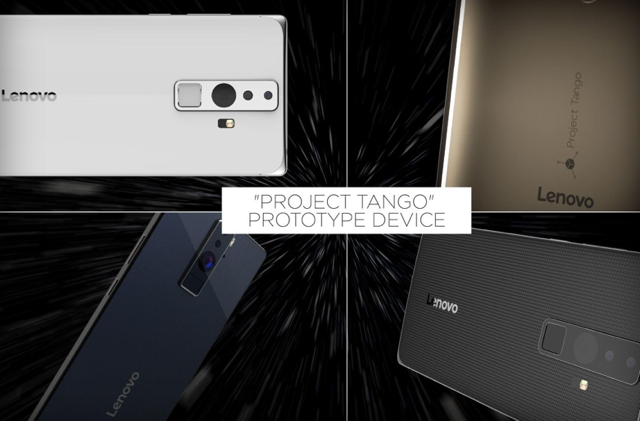 Project Tango aims to allow smartphones, tablets or other mobile devices to “measure the dimensions of a room, measure distances between objects or display them in a camera’s view of the real world,” reports The Wall Street Journal, enabling “augmented reality with many potential applications, such as seeing how new furniture might look in a room.”

Google released a limited number of prototype Tango devices for developers. Meanwhile, Lenovo has been working for a year with Google’s Project Tango team to address challenges such as design tradeoffs.

According to WSJ, “Google’s ultimate goal is to create a digital replica of the world — not just in two-dimensions as Google Maps does, but in 3D with details inside buildings — and then figure out the devices’ locations down to the half inch or even centimeter.”

With Tango in Android phones, “there could one day be millions of consumers mapping their surroundings, sharing their locations and sending that information back to Google’s remote servers.”