Turntable.fm founder Billy Chasen announced that the service is officially closing, “ending one of the most compelling experiments in music discovery to ever hit the Web,” suggests The Verge. Chasen attempted to play by the rules, paying every time a song was streamed, which eventually proved to be too expensive. He believes that the music industry is stifling innovation and digital startups. For his next venture, Chasen is going social with Ketchup, a free app he launched last month.

Turntable attempted to work with the labels, “not simply piggybacking on copyrighted music hosted by sites like YouTube or SoundCloud that might have been uploaded illegally,” reports The Verge. “The company also cut off access to its international users in areas it hadn’t yet signed deals… It transitioned from a DJ service to a live-performance experience back in December of 2013, and today is shutting down that service as well.”

“Ultimately, I didn’t heed the lessons of so many failed music startups,” Chasen wrote online this week. “It’s an incredibly expensive venture to pursue and a hard industry to work with. We spent more than a quarter of our cash on lawyers, royalties and services related to supporting music. It’s restrictive. We had to shut down our growth because we couldn’t launch internationally. It’s a long road. It took years to get label deals in place and it also took months of engineering time to properly support them (time which could have been spent on product).”

“The idea that the music industry’s current system of licensing and royalty fees is crippling American startups has been gaining traction for a while,” notes The Verge. “Companies like Rdio and Rhapsody have struggled, Spotify has raised millions but still can’t turn a profit, and Pandora announced today it was going to have to raise prices for all its subscription customers.” 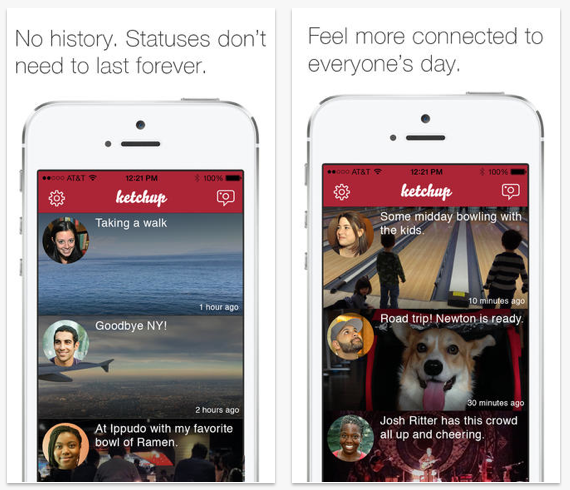 Chasen said that he is not planning another music venture in the near future, due to all the obstacles of the current system, but about a month ago he launched Ketchup, an iOS app (pictured above) to help users keep friends and family updated without turning to their wider social network.

“My girlfriend wants to know when I’m home, or at the office, or at the coffee shop, but blasting that out to my whole Twitter following would annoy people,” said Chasen.

“Imagine a status update you can leave for people, the way you once did with your AIM or Gchat away message, but done in a way that is mobile native and lets you easily control who sees what status,” explains The Verge. “Chasen built the app with two other developers from Turntable and for now they’re keeping the project small and self-funded.”