Big Tablets Become a Reality in Work and Consumer Spaces

In 2013, Fox News was apparently ahead of the game when it introduced giant touchscreen tablets in its newsroom. What was unusual then is now becoming a trend, as these oversized megatablets are making their way into work and consumer environments. Defined as anything larger than 13-inches, which leaves plenty of room for a range of different sizes, the gigantic tablet has found its way into Carnival Cruise Line ships and McDonald’s fast food restaurants.

The Wall Street Journal proposes that there are three main reasons why big tablets are of interest: first, for “the diversity of their uses,” second, because no one “owns” the category, and third, for “the way these gigantopads allow people to interact with computers in new ways.”

More specifically, on these larger tablets, collaboration with others can take place in person, “as participants manipulate the device or share their work … a new model of interaction” that can be beneficial. Huge tablets are a combination of four devices found in office conference rooms: “a whiteboard, a videoconferencing system, a projection system and the laptops people bring to meetings.” 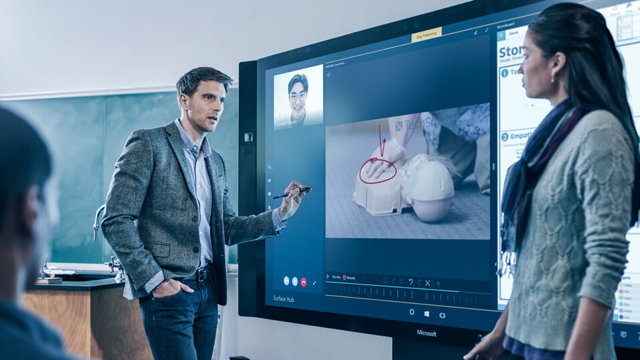 The possibilities of this space have now brought bigger manufacturers to the table. Microsoft offers its Surface Hub (above), as large as 84 inches, which can be operated via fingers or a stylus and runs Windows 10. Surface Hub, however, is priced at $9,000, which highlights the limitation of the enormous, unwieldy devices.

Prices are, however, expected to drop rapidly, says IHS Markit analyst Calvin Hsieh, who also reports that we’ll soon see the advent of OLED technology and its “lightweight, flexible displays.” Most of the new giant tablets are able to run Tactivo’s Mural, a collaboration software designed for remote teams that “lets a roomful of people write, add sticky notes, bring in graphics from the Web and perform a dozen other tricks on a giant, scrollable whiteboard.”

WSJ visited the engineering room of the Carnival Cruise Line’s newest $780 million ship, where chief engineer Cesare Boldrini works with a 55-inch touchscreen table that displays “300 screens of readouts and toggles used to control every part of the ship.” He can also move any of the readouts to a giant video screen.

At 500 McDonald’s in California, New York and Florida, the chain is experimenting with giant touchscreen kiosks for ordering meals. “We tried smaller screens,” said McDonald’s USA executive Alex Williams. “But the smaller kiosks didn’t create the noticeable change we were looking for.” Larger screens “make it easier for families to collaborate on orders” and are also more accessible to children and those in wheelchairs.