The main message from many of the AR glasses vendors on the CES show floor was that their current technology meets market needs, but they already plan to release major improvements on the current product line within the next year. Some of them demonstrated working prototypes of those next-generation glasses. Others had non-working mock-ups with descriptions of technical specifications that they said were close enough to the planned deliverable to be discussed publicly. We saw solutions from companies such as Osterhout Design Group, NuEyes, QD Laser, Lumus and Vuzix.

Osterhout Design Group’s R-7 AR glasses are based on ‘curved mirror’ technology. A small projector in the glasses over each eye projects the image down onto a semi-transparent see-through display.

The current version has stereo 3o-degree field-of-view (FOV), 720p displays, but the company plans to release AR glasses with stereo 6o-degree FOV, 1080i displays later in the year. 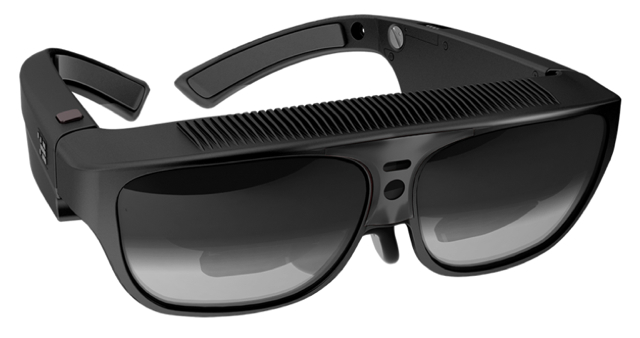 The glasses have interchangeable lenses that come in a variety of tints. By putting in dark lenses the AR glasses become VR glasses with a narrower FOV than dedicated VR glasses.

The prototype 6o-degree FOV, 1080i stereo display that I tried produced a spectacular looking image as I watched linear video content in a darkened room. It was like sitting in the middle seat of a movie theater. The screen was not all-enveloping, but it loomed quite large. The colors were bright. There was no noticeable screen door effect. When the curtain was pulled back and I looked out into the hall, the image was washed out by the light, but clearly watchable.

On January 5, it was reported that 21st Century Fox has acquired a minority stake in ODG and has entered into a strategic partnership to bring ODG’s technology together with the content of 21st Century Fox.

NuEyes has developed augmented reality glasses in the true sense of the phrase; their glasses augment the failing vision of people with macular degeneration. By incorporating their proprietary hardware and software into the ODG R-7 AR glasses described above, the NuEyes glasses are able to display magnified versions of the image that the wearer is looking directly at. The magnification is fully adjustable up to 14X. 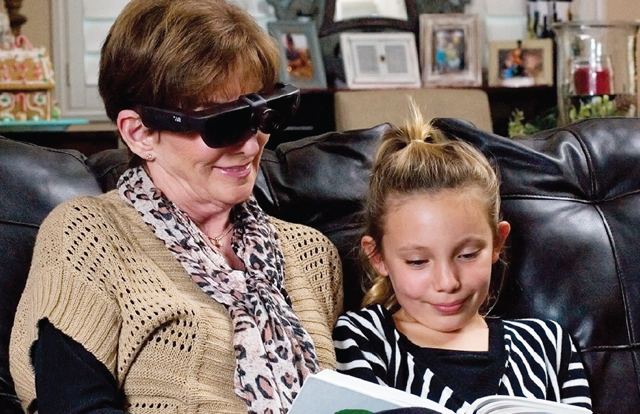 Because their intended end-users can often be technophobic, NuEyes’ strategy is to recruit and train vision specialists who want to offer these restorative glasses to their clients as a value-added service. The MSRP is $6,000, which is well below the $15,000 of competing products.

QD Laser is demonstrating Retinal Imaging Laser Eyewear. The company’s monoscopic prototype shines an RGB laser beam at micromirrors, which then bounces off of the eyewear’s reflective service and into the wearer’s eye. 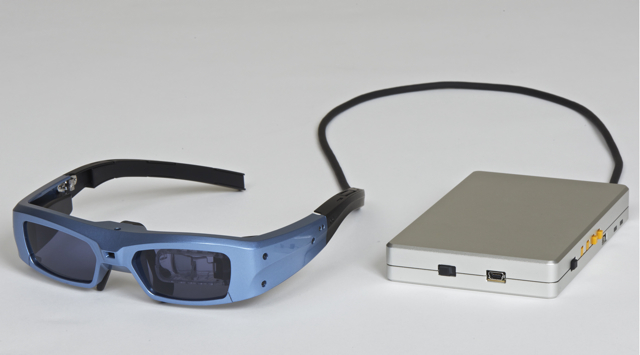 The prototype that I tried produced a dim, low-contrast, medium resolution image across a 25-degree FOV. The company hopes to come to market within a year, pending FDA approval.

Lumus, the large Israeli optical display tech company, unveiled its DK-50; a full color projection, wave guide stereo AR glasses and dev kit. Each lens has 40-degree FOV, 720p now, but the company expects to release a version with 60-degree FOV, 720p by the end of 2016. They did not have a working prototype for me to try. 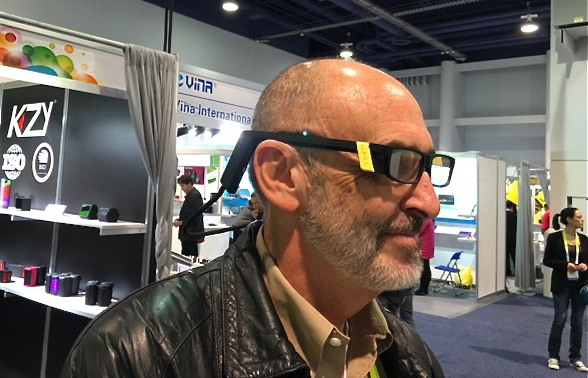 The onboard Qualcomm Snapdragon processor running Android enables the dual cameras and inertial sensors in the bridge to map the environment in real time. A touchpad over the ear with 9-degrees of motion sensing allows for a mouse-like user interface. The DK-50 will ship this year with an MSRP of $3,000.

Vuzix creates its AR image using separate RGB lasers in the temple, a DLP chip at the hinge, and wave guide technology in the lens. The tech produces a 27-degree FOV, 720p, 60 fps image. They claim that the image appears to float 4 feet in front of you and is focused to infinity. They did not have a working prototype for me to try. The glasses will have both voice-activated and touchpad-activated controls. They will have Wi-Fi and Bluetooth connectivity, so they can stream video and data directly to and from your field of view. The bridge-embedded camera feeds into the onboard processor so, for example, the glasses will display real-time text translations when the video is run through image recognition software and Google Translate.

The glasses can either run off the battery for up to 2 hours, or be tethered to a power supply for longer continuous use. These Vuzix prototype products, code named M3000 for single-eye AR and B3000 for stereo AR, will be demonstrated at E3 and come to market in the Fall of 2016. Pricing has not yet been announced.

Finally, I am including the Avegant Glyph because it has interesting display technology, and the eyeband only partially isolates you from your surroundings.

The Glyph uses DLP chips to shine a 40-degree FOV, 720p image directly into your eye. The image is clear, bright, and overall a comfortable viewing experience. It did not have any noticeable screen door effect. 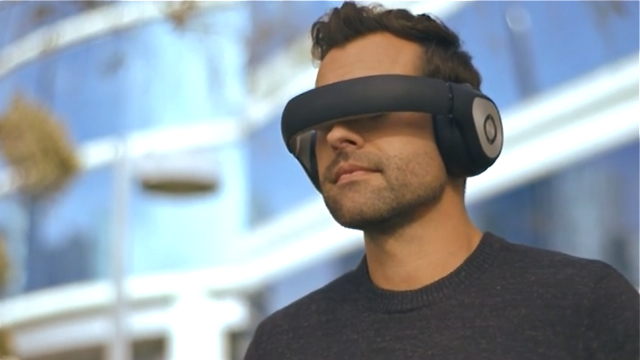 The 40-degree FOV experience is like sitting at the back of a movie theater; the screen is relatively small but the sound from the Glyph’s ear-covering headphones is awesome. Because the viewing band that goes over your eyes is narrow, you can see out the top and bottom.

You could wear this viewer while walking. Although it would look odd and awkward, your reality would be augmented. The MSRP is $699.