In the Grand Lobby of the Las Vegas Convention Center at CES 2018, ATSC president Mark Richer, NAB president Sen. Gordon Smith and CTA president/chief executive Gary Shapiro gathered to clink glasses of champagne to celebrate the official rollout of the new ATSC 3.0 television standard. In the audience were ATSC board members and several people who contributed to the standard. “Today’s milestone wouldn’t be possible without the work of hundreds of people,” declared Richer. “It’s been an intensive five year effort by all these people.”

Richer noted that CTA and NAB are two founding members of ATSC. ATSC 3.0 represents the first Internet Protocol-based broadcast standard, he added, and as such, “paraphrasing Winston Churchill, isn’t the beginning of the end, but the end of the beginning.” He also reported that ATSC will “work with our colleagues in Korea who are already on the air with ATSC 3.0.” 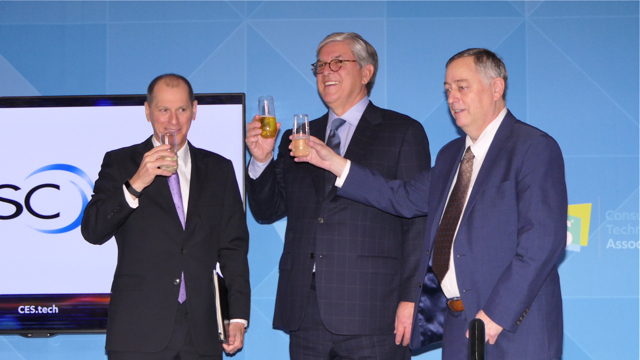 NAB’s Smith started by thanking CTA’s cooperation and collaboration. “I remember serving on the U.S. Senate committee when broadcasters and CTA took the lead in the transition to digital, which has bestowed many benefits on U.S. viewers,” he said. “Broadcasters are a cornerstone partner in moving this next step in technology forward.”

He also thanked the Pearl TV group, television set manufacturers and the Sinclair Broadcast Group, as well as “so many people for whom ATSC 3.0 was a passion” for bringing the standard to fruition.

“Broadcasting has always been free and local, which is a tough thing to be,” Smith continued. “People count on it everyday. With 3.0, we have the opportunity to take broadcasting into the next generation, that will provide the U.S. viewers new technologies. We’re not just investing in the spectrum but adding mobility, IP, immersive sound and HDR pictures.”

Smith also thanked FCC chair Ajit Pai and the FCC commissioners for “their courage to make this possible.” “In the age of cutting the cord, over-the-air and OTT is a great combination,” he said.

Shapiro noted how CTA was “ready to deploy ATSC 1.0 in 1996” and that it is in full support of the deployment of ATSC 3.0. He reported that the CTA funded an ATSC 3.0 field test at a station in Cleveland to make that happen, and predicted that digital displays will enjoy a bump in the coming year.