Movie theaters make their primary living at the concession stands, so it’s no surprise that the next trend at the local multiplex is aimed at making it easier to buy popcorn. AMC Theatres (about 350 theaters) and Regal Entertainment (570 theaters), the largest multiplex chains in North America, just debuted a way for customers to preorder and prepay for food and drinks via a smartphone app. The goal is to reduce what the chains call the “popcorn pinch point,” and reduce or eliminate the line at the concession stand.

The New York Times reports that AMC has already been testing this service at four theaters in Kansas City and plans to expand the test to other cities in January and then roll out nationwide as quickly as possible. 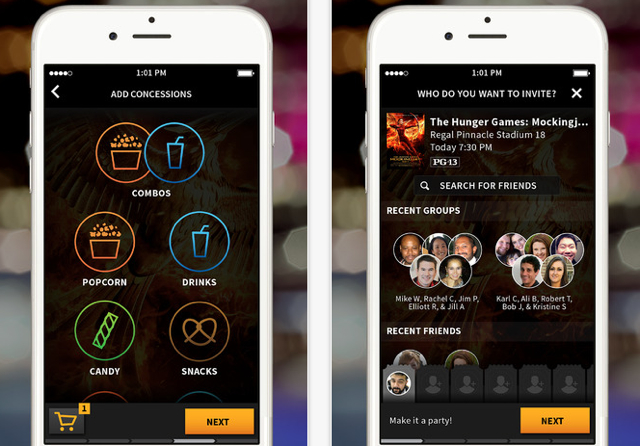 “Hopefully, along the way we will sell more food,” says AMC executive John D. McDonald. “Early results are very strong, albeit with a few expected operational bumps, which we are solving. We think this is another big innovation for our industry, right up there with luxury seating.” AMC is also considering delivering pre-orders directly to people in their seats.

Regal’s smartphone app — currently on tap at five Regal theaters in Knoxville, Tennessee — is based on a partnership with Atom Tickets, a California startup “that counts Lions Gate Entertainment as an owner.” Regal plans for a wide expansion soon. Atom also wants to bring “dynamic ticket pricing” (less expensive during slow periods and more expensive on busy weekends) to theaters.

All this is in response to the fact that multiplex chains are working harder to attract crowds, in part due to the proliferation of home theaters. Attendance by teenagers has also diminished. Improving the concession stand experience is key since it provides multiplex owners with profit margins of 85 percent of higher, versus the 50 percent of ticket sales returned to movie studios.

One-third of moviegoers don’t buy anything at the theater, many because they find the prices too expensive. With the new apps, multiplexes are removing one important obstacle to concession sales: waiting in line.