Amazon announced its Fire TV Stick, a $39 device ($19 for Prime subscribers) that plugs into the back of a television to provide access to movies and shows via online services such as Amazon’s Prime Instant Video and competitors Hulu and Netflix. Scheduled for a November 19th release, the Fire TV Stick offers twice the memory of Google’s $35 Chromecast (a bestseller on Amazon) and is priced lower than Roku’s $50 stick. However, it joins a crowded market of over-the-top Internet streaming devices.

The Fire TV Stick will compete with similar offerings from Apple, Google, Roku, and even its own $99 Fire TV set-top box, launched earlier this year. But competition may not prove to be the bigger issue.

“The real problem here is that many believe the entire over-the-top market is on its way out,” suggests Wired. “As consumers become more and more aware of smart TVs, they’ll no longer require devices like the Fire TV or the Fire TV Stick to watch Netflix on their televisions. Smart TVs will have all those capabilities baked right in.” 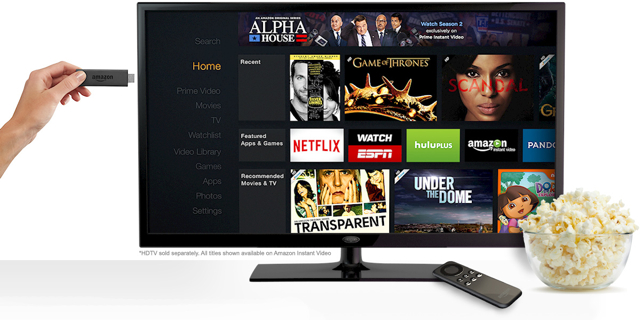 Jim Nail, a Forrester analyst specializing in online video, says his research points to consumers who are becoming more aware of the capabilities of smart TVs that can provide the same access as connected devices. As a result, interest in these additional devices is dissipating — and some manufacturers are catching on.

Roku, for example, announced earlier this year that it plans to release its own line of Roku TVs to be manufactured by TCL and Hisense, but featuring Roku’s operating system.

“In a blog post back in January, Roku founder Anthony Wood wrote that the goal of the new TVs was to ‘remove all of the complicated layers and menus, and unnecessary features and settings,’ involved in the smart TV space,” explains Wired. “In other words, the goal is to simplify.”

Whether or not Amazon is late to the party, the Fire TV Stick could help the company generate more Prime subscribers and sell more content. In addition to TV shows and movies, the device offers access to music and games. And it also has some impressive features, including a voice remote (sold separately).

“From the responsive interface to instant search results, everything about Fire TV Stick is fast and fluid,” claims the product site. “It’s all thanks to a dual-core processor with 6x the processing power of Roku Streaming Stick, a dedicated VideoCore4 GPU, and 8GB of storage — 4x that of Chromecast and 32x that of Roku Streaming Stick.”