Speaking at the WSJD Live global tech conference in Laguna Beach on Wednesday, filmmaker James Cameron discussed how his upcoming “Avatar” sequels will be influenced by virtual reality, noting that he now directs his cast using VR headsets and is increasingly involving CGI designers more closely during the scriptwriting process. While he does not anticipate his three films to be viewed on VR headsets, Cameron envisions a future in which VR devices will impact how audiences experience movies. 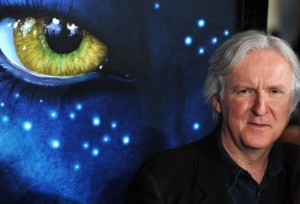 Cameron’s sequels to the 2009 blockbuster “Avatar” are being filmed simultaneously.

“In the moment that we are shooting, I’m seeing the characters in a virtual world,” Cameron said. “We are in a synthetic reality that surrounds us. The actors, the characters are taken into that environment.”

“Cameron predicted that virtual-reality headsets like Oculus Rift could eventually change the way audiences view films,” reports The Wall Street Journal. “By giving viewers the ability to participate in an unfolding narrative by looking around, movies could one day blend elements of video games.”

“At what point are we going to say cinema is cinema, games are games, is there a new narrative art form that involves aspects of both?” he asked.

Cameron indicated his lack of excitement for VR and the hype surrounding the Oculus Rift. “There seems to be a lot of excitement around something that, to me, is a yawn, frankly,” he said.

“What will the level of interactivity with the user be other than just ‘I can stand and look around…’ If you want to move through a virtual reality it’s called a video game, it’s been around forever.”

Cameron is also disappointed that 3D tech has not yet been widely adopted for film and television, suggesting that its future popularity may rely on a company such as Apple introducing 3D in mobile devices.