According to mobile analytics firm Flurry, female consumers are leading the charge in mobile gaming in terms of time, money and loyalty. Based on analysis of 1.1 million worldwide devices, Flurry concludes that mobile gaming currently represents 32 percent of the time people spend on their phones. Meanwhile, the report specifies that females spend 35 percent more time in gaming apps than males, make 31 percent more in-app purchases, and have 42 percent higher 7-day retention on average.

Flurry cites the recent success of the “Kim Kardashian: Hollywood” game as an example of a major hit with female gamers. The game quickly hit the top grossing charts on the App Store and has experienced a $700,000 per day revenue run-rate.

However, Flurry also suggests that the trend of females taking the lead in mobile gaming started prior to the Kardashian game’s success.

Looking specifically at apps that are on the Flurry Network, the report examined time spent across 19 categories of iOS games (see chart below). 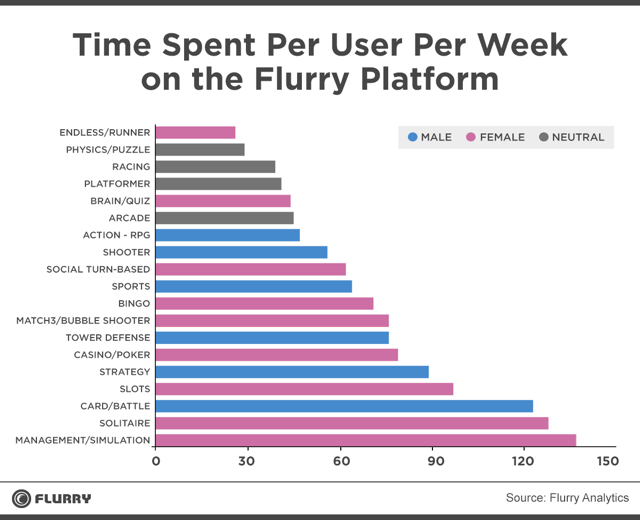 “Males have kept their dominance in card/battle games, strategy, tower defense, sports and action/RPG,” explains Flurry. “That should give some hardcore game reviewers, irked by the overnight success of the Kardashian game, a sigh of relief.”

“While the broadening of the mobile gaming base may not be welcome by hardcore male gamers, it brings good news to advertisers seeking to reach their audience. In fact, advertisers are shifting billions of dollars in advertising to the mobile platform with the hopes of reaching the audience that is glued to smartphones and tablets 24/7/365.”