Wearables Waiting For a Killer App to Take Them Mainstream

Considering a mere five percent of U.S. consumers wear activity trackers, will wearables ever cross-over to the mainstream? Even the experts in this field have trouble agreeing. Steven Pierce, of IBM’s global business development, said we’ll have ten devices on our bodies very soon. “Wearables will be the key source of information in five years,” he said, listing implantables and injectables as future wearables. But Sonny Vu, founder of Misfit Wearables, disagreed. “Five years isn’t that far away,” he said. “I don’t think science will advance that fast.”

He noted that he buys his t-shirts for $6.99 at Walmart and wouldn’t consider buying a re-chargeable t-shirt for a much higher price.

What the wearables market needs to succeed was the topic of a panel, “The Era of Wearables.” For the short-term, the key to success is simple, said panelists: a killer app. 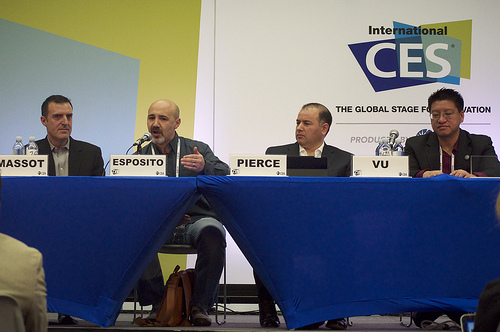 Vu pointed out how he knows that the killer app isn’t here yet. “If I forget my activity monitor, I don’t know if I’d turn around and go home to get it, the way I would with my smartphone.”

Pierce believes healthcare is that app, pointing to the fact that 17 percent of the U.S. GDP is spent on episodic healthcare. Wearable apps focused on preventative care with vitals, genomic and personal data will push them into the mainstream, he stated.

Wearability is a key criteria, said Vu, whose company focuses on wearable products that consumers will want to wear all the time for a long time. “We see blue jeans as our competition,” he said.

Fashion plays at least some role in acceptance of wearables. “I worked with smartwatch companies six years ago,” said Chris Massot, CMO of Synapse Production Development. “They were astounded how much fashion played into their success. What’s going to drive this is the fashion side.”

But some use cases can usurp the perceived importance of style. “If a wearable device could give you a four-hour advanced notice of a heart attack, you’d wear it even if it were ugly,” said Vu. “There are killer use cases that only do one thing.”

Perhaps the biggest impediment to wearables is a basic science problem: a power source that doesn’t need constant re-charging.

“Power is a gigantic problem in this space,” said Vu. “One of the bigger breakthroughs we’re waiting for in this space is energy density, whether it’s power harvesting or better batteries. Many of these technologies are beyond the five-year horizon. Are we stuck with just making it fashionable for the next three to five years? I hope not.”

In the meantime, as wearable devices proliferate unabated, their creators are left to determine what a wearable needs to do to entice users to buy.