Michigan-based startup Avegant has created a prototype head-mounted virtual retinal display (VRD) device that provides extremely sharp definition and depicts images realistically. The technology uses two million micromirrors to project directly into the eye. Avegant’s device will provide new ways to experience media online or on television. The company, which expects the display’s release in early 2014, also envisions content to be produced specifically for it. 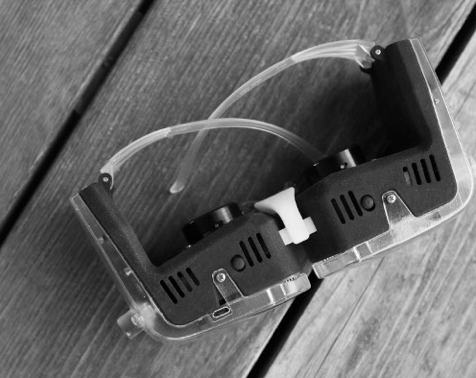 The head-mounted display (HMD) does not have screens, but the wearer will perceive the visual signal as an 80-inch display panel from a distance of eight feet. Avegant’s HMD 3D visual effect is similar to other devices, such as Vuziz’s Wrap glasses or the HMZ by Sony, but Avegant’s device may be prove superior.

The production model is planned to begin shipping in Q1 of 2014 and will be greatly improved from the prototype. It is estimated to weigh significantly less, include built-in sound and a battery pack, and will be just as powerful.

“The HMD, which can handle 240Hz content (and beyond), will connect to a variety of sources — DVD players, laptops, smartphones and game consoles — and regardless of the quality of the stream, footage should look sharp and realistic,” explains Engadget. “It’ll serve as a head-tracking VR device during game play, a bit like the Oculus Rift, but it’ll be just as appropriate for consuming movies and TV shows, or even browsing the Web.”

The HMD is intended to make common media look great, but Avegant’s CTO Alan Evans and CEO Edward Tang foresee more video content made specifically for the device. Users will be able to move their head to view a football stadium during an NFL game broadcast, or see international cities as if they were there.

Pricing information is not available, but consumer prototype versions will be present at the upcoming Consumer Electronics Show in Las Vegas. It is expected that Avegant’s HMD will appear at crowdsourcing sites in the next few months.

Photos and a video demonstration of the HMD can be found in the Engadget post.