In Las Vegas this week, Samsung is showcasing its first MicroLED consumer television. Dubbed “The Wall,” the 146-inch, bezel-less, 4K TV is modular, offering consumers the ability to customize its size and shape by adding or removing sections without affecting image quality. MicroLED’s self-emitting tech uses millions of micro-sized chips that individually emit light, which eliminates the need for color filters or backlighting. If one day affordable, this tech could replace LED for consumer TVs and lead to wallpaper screens. The Wall by Samsung is expected to be available later this year, although pricing has yet to be announced.

“The technology will eventually allow for so-called wallpaper screens, which are displays that cover an entire wall of any shape or size, said James McQuivey, a Forrester analyst,” reports CNN. 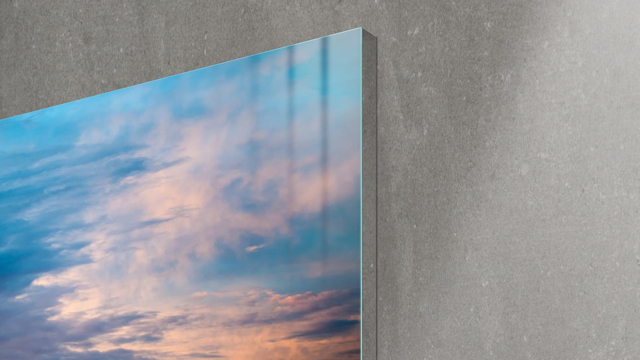 “On a wall screen, you can watch TV, designating any section or portion of the display to act like a TV,” McQuivey noted. “But the rest of the wall can continue to display other things: family memories, simulated decor, or the avatars of family members watching remotely.”

According to Wired, “Your next TV almost certainly won’t be MicroLED, or even the one after that. Someday, though, it could become the industry standard, one that’s bigger, brighter, and more beautiful than almost anything on the market today.”

While today’s LED tech works well, it requires backlighting, which can affect contrast ratio. OLED does not require backlight, one of the primary reasons its blacks and overall picture quality look so impressive. MicroLED aims to take this quality to the next level. 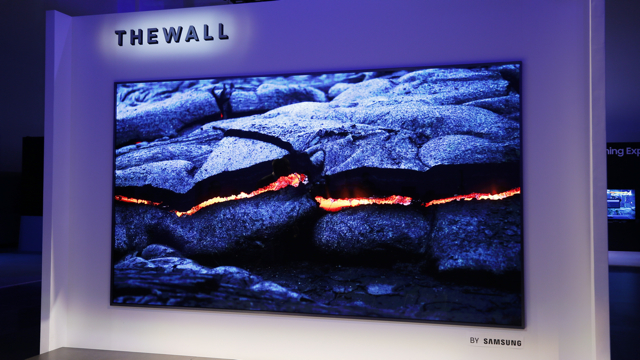 “Like OLED, MicroLED ditches the backlight, favoring instead extremely tiny LEDs, each of which comprises a red, green, and blue sub-pixel that can provide its own light,” explains Wired. “It also swaps in an inorganic material — gallium nitride, for those keeping score at home — for OLED’s organic offering, a critical difference for a few reasons.”

“OLEDs are made of organic materials that age, resulting in a decrease in luminance over time, with the potential for uneven aging,” explained DisplayMate president Ray Soneira. “LEDs are inorganic, can be made brighter than OLEDs, and aren’t as susceptible to aging.”

Engadget listed The Wall as a finalist in its Best of CES rankings: “The 146-inch 4K screen we saw promises ‘outstanding brightness, contrast and close-to-perfect viewing from any angle.’”

Samsung also announced the “first QLED TV featuring 8K AI technology, which will be launched internationally, starting with Korea and the U.S. during the second half of 2018,” according to the press release. The tech “employs a proprietary algorithm to adjust screen resolution based on picture quality” in each scene, in order to “transform any type of content from any source into a high-resolution 8K.”