During the NAB Show, thousands of companies descend on Las Vegas. Perhaps one of the smallest is a three-man startup called Eyeris, that aims to change the way we gather data about consumer preference. Featured by the SPROCKIT program, a new venue co-sponsored by NAB that aims to highlight nascent tech companies that may have a big impact on the entertainment industry, Eyeris tracks viewer response to motion picture content using clever software and the cameras already embedded in the the devices most of us carry.

The basis of the technology is emotion recognition, a process which uses digital imaging to create a moving map of the human face, in a technique similar to that used in so-called “performance capture” technology that has recently enabled filmmakers to lend such lifelike performances to digital characters onscreen.

Emotion capture records the movements of the human face, and by comparing them to a known library of facial expressions, is able to plot the variations of a number of emotions, including joy, disgust, surprise, and others. 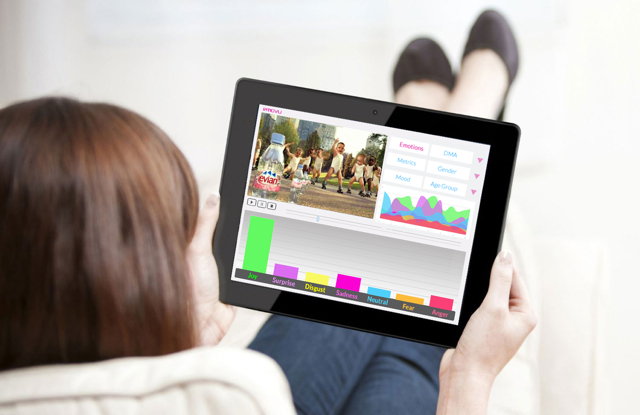 The technology may sound a bit far-fetched, but just a few minutes toying with a demonstration version left this reporter both surprised and impressed with its accuracy. Though hardly foolproof, Eyeris seems fairly capable of giving a decent approximation of what emotion a viewer is portraying. (Whether or not that portrayal is in fact a true representation of emotion is a far more complicated question, and one on which great sums of money are daily won and lost at poker tables in this city). The skeptical reader may see an online version of the demonstration here.

Currently, the program requires that a viewer consume content on a device with an embedded user-facing camera (like a laptop or tablet), or using a large device like a television with a connected webcam. In either case, the user must grant permission before the software can operate.

Those two hurdles may prove major obstacles for widespread adoption, though the developers argue that even a small population of people using the software would still represent a considerably larger and more accurate sample than current methods offer.

The developers say the software is also able to accurately determine (or verify) demographic informations, like age or gender. The goal, say the inventors, is to provide real-time audience monitoring that far exceeds the accuracy of current methods like focus groups or real-time audience polling. The product is being developed primarily for the entertainment market, but if successful, would likely find other applications, particularly in the evaluation and analysis of political advertising.