Facebook and Pinterest are the clear standouts when it comes to referral traffic from social networks. While Facebook leads the pack, accounting for more than 10 percent of traffic to publishers in September, Pinterest holds second place, driving more traffic than Twitter, LinkedIn and Reddit combined. According to data from social plugin service Shareaholic, collected from 200,000 publishers, Pinterest drove 3.68 percent of traffic to publishers in September, about three times as much as third-ranked Twitter.

Most of the social networks showed year-over-year increases, except for Reddit and StumbleUpon, which declined 35 percent and 27.5 percent, respectively. 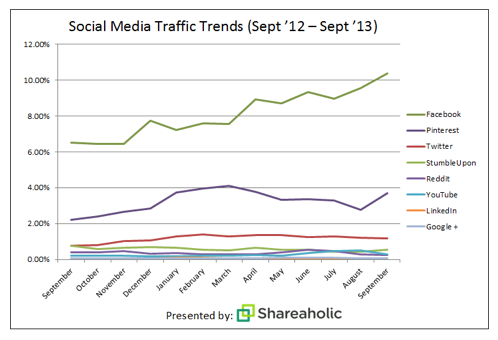 Shareaholic’s “Social Media Traffic Report” tracked eight of the most popular social media platforms over 13 months. Among the key findings: