SkreensTV Wants to Bring Everyone Together Around One TV

A company called SkreensTV hopes to reinvent the way families share the living room television with a new approach to split screen technology. With up to five HDMI inputs, the new device enables users to split one TV screen to display content from various sources including pay TV, streaming services, social network sites and gaming consoles. With the use of a tablet or other mobile device, users can adjust for size and rearrange the positioning of the content being projected onto the larger screen.

The hardware device appears to be relatively the same size of other streaming devices such as the Roku and Apple TV. According to The Verge, the device hit Indiegogo last week with a pre-sale for $100 less than its retail price of $499. 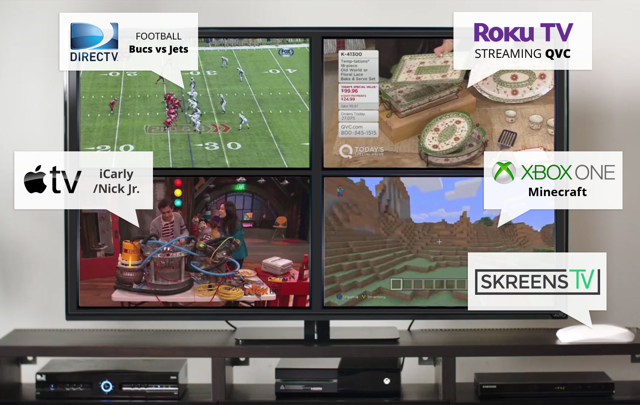 Targeting gamers and sports fans, creator Mark Todd envisions SkreensTV as a gateway to bringing the sports bar experience right to your home. Imagine being able to watch multiple sports games at once, or play two different video games from different consoles while having access to your Twitter feed all on the same screen.

According to The Verge, the device “takes up to five HDMI inputs at up to 1080p each, then combines it into one 1080p signal that’s plugged into your TV and receiver.”

Hardware improvements have reduced an initial signal delay of 7 seconds to an instantaneous 32 milliseconds. Audio capabilities are set to play sound on individual tablets or mobile phones to match the content being projected on the television to its source. In the future, Todd envisions a device built to support HTML5 and Javascript to encourage the development of additional apps.