Disney Research is using 3D printing to create components to build expressive eyes for robots. However, rather than mimic human eyes, which can appear strange to some, the robot eyes have a cartoonish look. The technology may have future applications for interactive toys, video game characters and possibly even human prosthetic eyes. The research team demonstrated the technology at the ACM SIGGRAPH Conference in Anaheim last week. 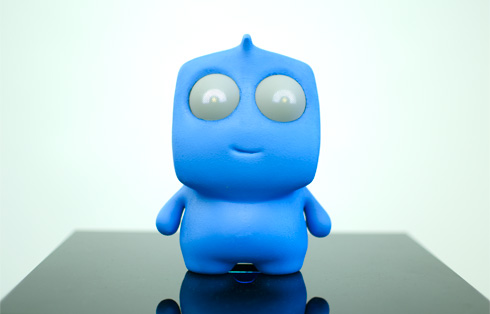 “The eyes, called Papillon, are made of a translucent dome of white plastic that covers a bundle of optical-fiber-like structures called light pipes,” explains GigaOM. “All of the components are 3D printed, which is highly unusual for parts that resemble optical fibers. It also makes the parts cheaper.”

“Each of the pipes delivers a point of light that creates the robot’s irises,” notes GigaOM. “They can shift size and color to display feeling or a shape, such as a heart. The resulting eyes are lower resolution than a Furby’s, but more friendly.”

“One of our goals was to create minimal displays, to figure out how much resolution do you really need to express emotion,” Disney Research, Pittsburgh research associate Eric Brockmeyer explained in a press release. “It turns out you really don’t need that much to convey a compelling interactive experience.”

“To allow the design of highly expressive eyes, the Papillon uses our new printed optics technology where eyes are designed as a bundle of 3D printed optical fibers guiding images projected on the receiving end of the bundle to the surfaces of the character eye,” explains Disney Research. “The eyes are printed slice-by-slice using transparent photopolymers separated by a translucent support material. Papillon is based on a set of algorithms that implements classic Fibonacci spirals and Voronoi tessellation for efficient packing of fibers on a surface of an eye and in the bundle.”

“This allows creating arbitrary curved display surfaces while minimizing visible artifacts, such as light distortions on the edges of the eye. The resulting technology is effective in designing compact, efficient displays of a small size and shape that can have a broad range of applications.”

“Papillon is a technology that is scalable and flexible,” said Ivan Poupyrev, senior research scientist in charge of the interaction team at Disney Research. “We envision it being used for building interactive toys, supplemental characters for video games, robots or perhaps eventually even human prosthetic eyes.”

The Disney Research page includes images (such as the one above) and a brief video demo featured at SIGGRAPH.