Samsung is looking to expand virtual reality applications beyond gaming to the world of broader entertainment and, hopefully, mainstream adoption. A few months after unveiling its updated Gear VR headset, the company announced plans for live VR broadcasts from UFC (Ultimate Fighting Championship), the X Games and Live Nation. Samsung will debut VR Live Pass by broadcasting the UFC Featherweight Championship bout between José Aldo and Max Holloway on June 3 from Rio de Janeiro. VR Live Pass will then offer the X Games from Minneapolis July 13–16 and a major concert performance from Live Nation in August.

“This isn’t the first time Samsung has invested in entertainment partnerships to encourage VR uptake,” reports VentureBeat. “Last summer, it teamed up with NBC to bring 85 hours of VR coverage from the Rio Olympic Games, while it also partnered with Six Flags to launch VR roller coasters in amusement parks.” 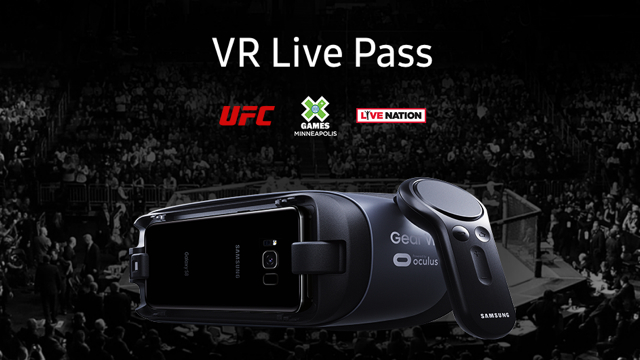 In March, Samsung packaged a free Gear VR headset and controller (normally $130) with its S8 and S8+ smartphones for consumers who preordered one of the new flagship devices.

However, consumer curiosity alone cannot drive VR adoption; compelling content is also required, “which is why Samsung is encouraging mainstream sports and music companies to broadcast their events in VR.” While expanding VR offerings should be the next logical step in fostering additional interest, it is too early to tell whether live VR broadcasts will gain traction.

“Spherical video is cheaper to produce than ‘true,’ computer-generated virtual reality, which is why there’s so much of it in the Gear VR store (and other virtual reality platforms),” notes Engadget. “The long-term audience for live, 360-degree sport is unclear, however. For most it’s a novelty, one that’s immersive but ultimately inferior to carefully orchestrated TV broadcasts.”

Samsung is among the companies that strongly believe in a VR future. The free VR Live Pass will be made available via the Samsung VR app.