Qualcomm has unveiled the Snapdragon VR820, a reference platform for a standalone virtual reality headset, developed with Chinese electronics company Goertek and built on Qualcomm’s Snapdragon 820 mobile processor and SDK. VR820, expected to be available by the end of 2016, offers higher resolution than the Oculus Rift or HTC Vive, although a lower refresh rate. The Snapdragon 820 was also used for the Pico Neo, a $500 Android-based VR device with handheld controller co-developed by the same two companies.

The Verge describes the specs of the Snapdragon VR820: 1440 x 1440 resolution for each eye (the Oculus Rift and HTC Vive offer 1080 x 1200 resolution), and a 70Hz refresh rate, compared with 90Hz for the Rift and Vive. Other features include two cameras for eye tracking and “inside-out” tracking, which relies on “cameras mounted on the device to track head motion instead of relying on external sensor systems.” 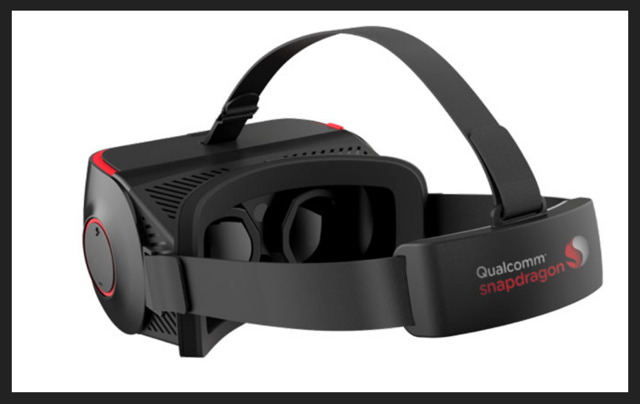 This kind of tracking is “theoretically achievable,” but has yet to be seen in a shipping device. Intel announced something similar with its Project Alloy “merged reality” prototype, but Qualcomm executive Hugo Swart says, “From our understanding of what some of our competitors are doing, ours seems to be a much more commercially focused effort.”

What kind of commercially available headset will actually emerge from the VR820 has yet to be determined, since “anyone who based a product on the reference platform would need to devise their own controller.” Further, to take advantage of the innovative features of the VR820, headset manufacturers “would need to make sure that software developers will actually build for them.”

Swart notes that, “we’re seeing a lot of demand in China, that does not mean that devices will not be available elsewhere.”

But The Verge warns that Qualcomm has made a high-stakes bet on the VR820. “If a system like inside-out tracking doesn’t work, it could make the entire experience unpleasant or outright nauseating, and an all-in-one headset has to be powerful enough to run experiences well without being too heavy or bulky.”

Finally, although the resultant headset would be cheaper than a “high-end desktop setup,” it’s still more expensive than a “mobile VR case to use with a smartphone.”