Via closed door demos and YouTube videos, Israel-based PointGrab has recently been promoting two new versions of its gesture-recognition software as a lead-up to this week’s CES. For the next generation smart home, AirTouch and PointSwitch will help consumers control devices by using gestures from a distance. The software products, which now work with standard 2D cameras on consumer devices, have already been integrated into TVs and PCs from Acer, Lenovo, Samsung and others.

“AirTouch is an update to the current PointGrab technology, which recognizes hand or finger motion and tracks it to remote-control devices,” reports CNET. “AirTouch uses depth information to control objects from a distance. It goes beyond the typical cursor control, enabling more of a virtual touch screen controlled by pointing and gestures, including swiping, grabbing, and two-hand zooming.”

PointGrab has posted a 2-minute video on YouTube that illustrates the “virtual touch space” approach of AirTouch (screen grab below). 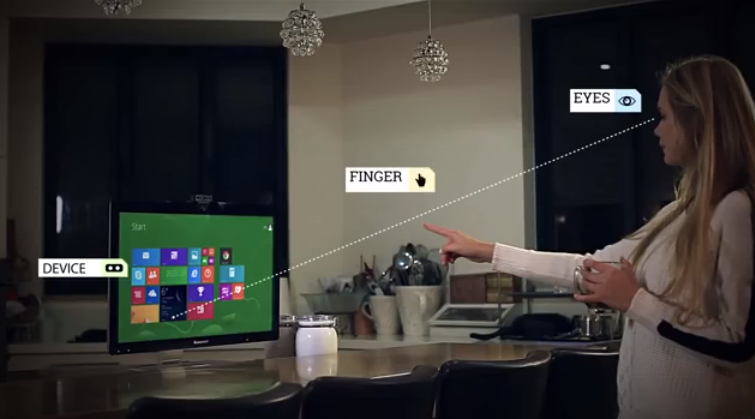 “The second product, PointSwitch, is designed to control home appliances via pointing and gestures,” notes the article. “The PointSwitch technology, a chip with gesture algorithms embedded in a device, calibrates the position of your eyes with the position and direction of your finger. For example, you can point your finger at a lamp and turn the dimmer up or down. The PointSwitch technology can detect gestures up to 15 feet away and under all lighting conditions, the company said. PointGrab is working with manufacturers to embed its chips in ‘smart’ appliances.”

To see PointSwitch in action, even in dark spaces, check out the 1-minute video from PointGrab.

On Friday, PointGrab and Sunplus Innovation Technology (SunplusIT) announced a new partnership that plans to bring PointSwitch to the home appliances market.

“PointGrab and SunplusIT are initially targeting lighting control and air conditioning OEMs for residential and commercial segments,” notes the press release. “Both companies will jointly offer OEMs a unique solution that is based on a sophisticated computer vision algorithms embedded in a low-cost high-performance ISP that can be used for both retrofits and new installations.”

The release also says the technology will be available for private demo in an executive suite at the Las Vegas Hotel this week.

Companies such as Eyesight and Extreme Reality are currently working on gesture and body movement recognition software. Microsoft’s Xbox One already controls more than games and Leap Motion has introduced a gesture-based hardware controller. PrimeSense, the company behind Microsoft’s original Kinect, was recently acquired by Apple.

However, ExtremeTech points out that the Wii, Kinect, and PS Move have proven “tedious and tiring” to some. And while the technology may be a logical step for a motion-controlled smart home, obstacles remain: “Even if the system can perfectly detect your finger and eyes in every conceivable condition, most people don’t live in an entirely smart home. Most of us have regular cloth curtains that sit on a plain metal bar. Not everyone has an expensive smart TV that has the menus and options to be manipulated by touch, or central air and heating controlled by a thermostat.”

“Whether or not PointGrab’s tech works beautifully, it may not work with anything we currently own except our computers, which is the one device that wouldn’t be too useful to control from across the living room in most scenarios,” suggests ExtremeTech.