Adventr has launched a new drag & drop editing platform that allows users to create interactive videos. The New York City-based startup is backed by musician John Legend, and was founded by Devo Harris, better known as Grammy-winning producer and songwriter Devo Springsteen. The service essentially works by overlaying graphics on video, and giving users multiple choices. Adventr also allows users to share their videos on Twitter, Facebook, and any website that supports the VPAID format.

“This is what I believe is the future of video,” Harris said of Adventr. “This isn’t about clicking, this is about controlling your content. Your experience is personalized and interactive.” 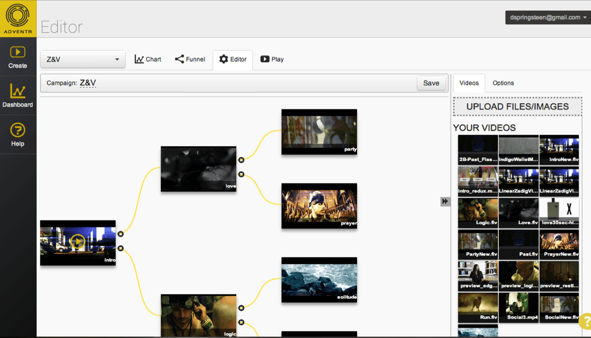 Harris drew inspiration for the startup when he helped form the band Riot !n Paris, and found that interactive versions of their music videos did significantly better than videos in standard formats. He realized that there was a need for easy-to-use technology that could be used to create interactive videos.

“If he’s right and this is the future, there will probably be competition,” reports TechCrunch. “Harris acknowledged that other companies could create interactive videos, but not necessarily with the simplicity of Adventr’s interface.”

“Harris argued that the real power here is in the data and analytics that Adventr provides,” notes the article. In regards to movie trailers, for example, “a movie studio could see which choices get the most response from an online audience, and then make sure that footage is included in the version shown in theaters and on TV.”