A new app called Whipclip is making it easier for people to find, extract and legally share their favorite video clips from TV shows and music videos. At any given time, users can open the app, choose from a list of shows playing in real time and create snippets using the last two minutes of footage previously played from that show. It is reportedly that simple for users to create clips to be easily shared with friends through the app or across various social media platforms. 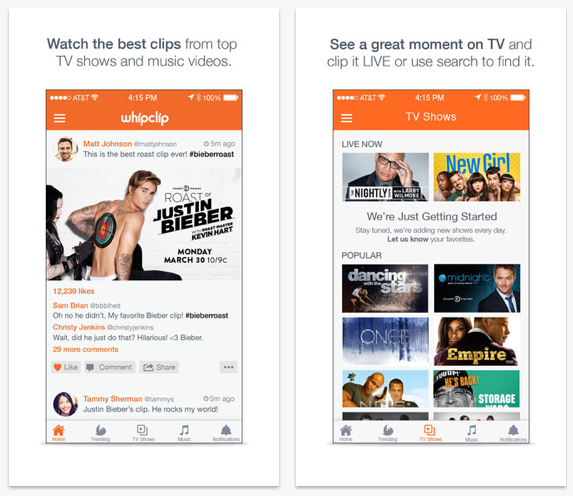 “[Users] can also create clips of shows that aren’t airing right at that second… by searching the show’s closed captions” for the right moment, TechCrunch explains.

The app was co-founded by Richard Rosenblatt, a successful tech entrepreneur, whose previous accomplishments include the launch of Demand Media and Intermix Media. Variety reports that in 2005, Rosenblatt sold Intermix Media (including MySpace) to News Corp. for $580 million.

For this recent endeavor, Rosenblatt reportedly raised as much as $20 million last year from a round of investors that included Ari Emanuel, Steve Bornstein and Peter Guber.

According to TechCrunch, “[the] company is constantly recording live content from it partners,” which include Comedy Central, ABC, CBS, FOX, VH1, A&E, Lifetime, Bloomberg, OWN, truTV, Universal Music Group and Sony Music.

Despite the early partnerships, some networks have been reluctant to offer too many shows, seeing this more as an experiment than anything else.

Whipclip is currently available for iOS users. An Android version is coming soon.