There is a new mobile app called Chosen that offers users a platform through which they can upload videos of themselves performing talented acts or simply judge and critique other performances, all while earning rewards for actively doing so. Chosen aims to recreate the talent show experience and competitive landscape of TV shows like “American Idol.” Users can quickly scan through various performances, vote for those they like and skip those they don’t with the swipe of a finger. 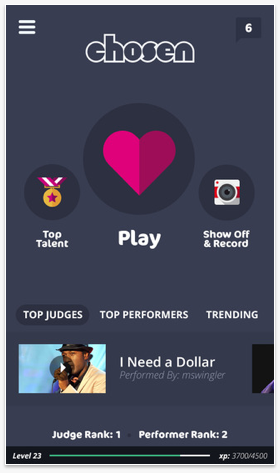 In many ways, the app feeds off the “popularity of professionally produced shows like ‘The Voice’ and ‘The X-Factor,’ and the explosion of the amateur music-making on YouTube,” The New York Times reports.

The app is as much about the performers as it is about the judges, who can also upload videos to share their thoughts and opinions about a particular performance. As Chosen’s chief exec David Hyman says, “The idea is that we can’t all perform, but we all want to believe that we have taste.”

Like the performances, popular videos of the judges are listed on a scorecard where a higher placement earns users more reward icons. The rewards are an incentive to increase user activity and ignite competition between users.

These reward icons would mean nothing without an actual prize. So, for starters, Chosen has struck a deal with Bonnaroo, the music festival in Tennessee, “to have one winning performer from the app take the stage, and also for a top judge to get an all-access pass to the festival,” which will take place later this summer, NYT reports.

Chosen is currently available for iOS users, and an Android version is in development.