New App Brings the Magic of Disney Animation to the iPad

“In all, there are 750 interactive illustrations, with over 400 short animation clips, 350 images from Disney’s archives (including backgrounds, concept art, character sketches, and super-zoomable storyboards),” reports TechCrunch. 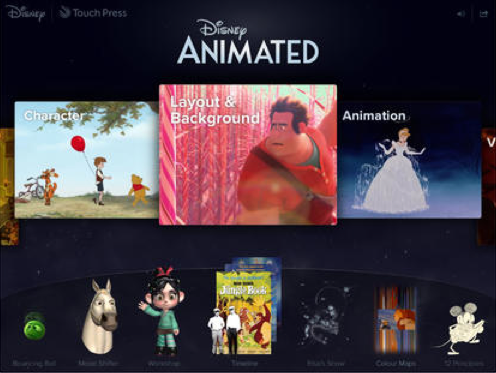 “This app is entertainment and educational, but it’s also like a museum,” explains David Reynolds, Disney’s head of social media. “Looking at this opportunity to tell the story and our rich legacy, and you will only see that with full access. It just felt like the right time.”

Reynolds told TechCrunch that consumers who purchase the Disney Animated app will receive free content upgrades in the future, but there are no current plans for an Android version.

“Disney Animated is organized like an interactive book,” explains Mashable. “Each section or chapter is represented by a button with a clip from one of Disney’s movies playing on it. Sections range from story and visual development to animated character development and music design. In each section, you can read through a basic overview of the topic on book-like pages and tap into additional accompanying materials.”

Some additional features from the release notes:

“The whole experience is magical and truly amazing to play with. It’s something you’ll have a hard time putting down,” suggests Mashable. “At $13.99, Disney Animation is pretty expensive. But the access that the app gives Disney fans makes that price tag seem like a bargain. Disney fans will likely return over and over and again.”