Netflix is raising its monthly subscription rate by more than 30 percent for those interested in streaming 4K video. Subscribers who have not yet signed up for 4K content will be charged $11.99 per month (the family plan), up from the standard $8.99 charge. For customers who have already signed up for a 4K-enabled account, the price change will not take effect until August 2016. Netflix 4K streams currently only work with Ultra HD TVs released this year that include a built-in H.265/HEVC decoder.

In early May, Netflix raised the price of its standard HD package for new subscribers from $7.99 to $8.99. 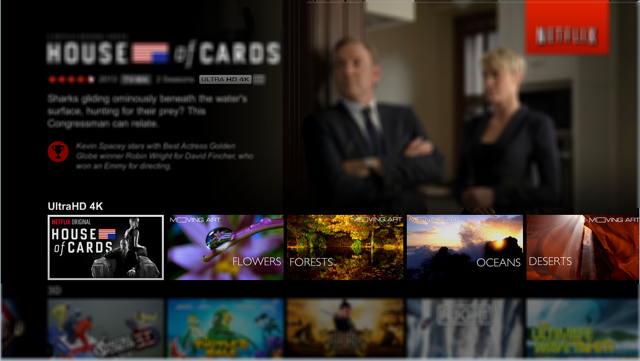 “Current subscribers already paying for 4K content (prior to August 12th) will be grandfathered into the older $7.99 a month plan until August 12th, 2016 according to a Netflix customer service representative. The new 4K plan also permits up to 4 devices to play simultaneously.”

Variety reports that the reason for the price jump has to do with the increased costs to Netflix related to producing and acquiring 4K content.

The company’s 4K catalog is still getting started. Offerings include all seasons of AMC’s “Breaking Bad,” season two of Netflix’s original series “House of Cards,” “Ghostbusters,” “Ghostbusters 2,” some nature documentaries, and recent additions “The Smurfs 2” and NBC’s “The Blacklist.”

“To oversimplify the whole thing: getting 4K TV content, even through Netflix, is still a bit limited/wonky right now,” suggests TechCrunch. “If you’re not already in the market for a TV upgrade, there’s no reason to rush out and get a 4K TV right now — you’d just be paying a premium (on both the TV and the subscription cost) for something you’ll hardly use right now. Wait a while.”