Museums Bridging the Gap Between the Digital and Physical

The Smithsonian Institution has developed an iOS app called “Skin & Bones” that uses 3D animation and augmented reality to help bring fossils to life for children visiting Bone Hall at the National Museum of Natural History. In addition to the 3D animations and related information, the free app offers detailed maps of the museum. Complimentary Wi-Fi is available on-site so visitors can easily download the app. The approach is another example of how organizations are exploring compelling use of immersive technologies.

“The Smithsonian’s National Museum of Natural History’s Bone Hall is one of the institution’s most popular exhibits, housing close to 300 skeletons and fossilized specimens,” reports Gizmodo. “And using the new Skin & Bones app, 13 skeletons in the collection can now be brought to life by simply pointing the iPad or iPhone’s camera at the exhibit. A 3D version of the animal will come to life, accompanied by educational animations and factoids.” 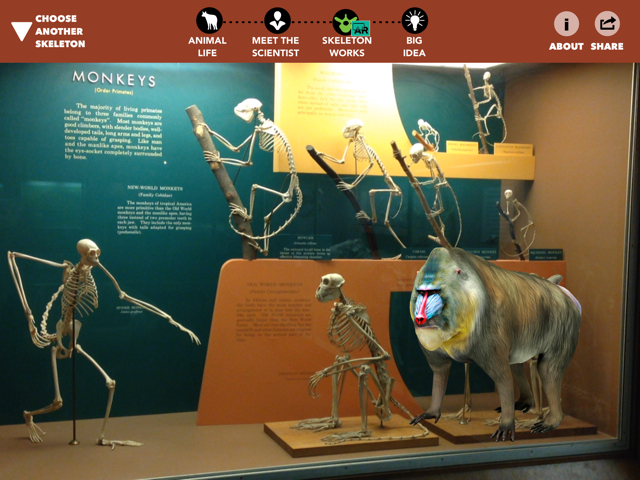 “This app is all about sharing some of the untold stories behind one of the museum’s most iconic collections,” explains Robert Costello, the Museum of Natural History’s national outreach program manager (see press release). “From vampire bats to a 150-pound Mississippi catfish, ‘Skin and Bones’ highlights specimens across the tree of vertebrate life and invites visitors to interact with them in surprising ways.”

“Atlanta’s Fernbank Museum did something like this back in 2011,” notes ETC’s Phil Lelyveld. “By looking through VR binoculars as you walked around the natural history museum, you could see virtual wild animals roaming the halls. More and more museums and public spaces are exploring the use of immersive VR and AR.”

Meanwhile, the Smithsonian’s design museum, Cooper Hewitt, now loans visitors a giant interactive pen. While not an immersive experience like Skin & Bones, the pen adds digital records of objects to the personal museum collections of visitors when they touch the pen to a small pattern accompanying the displays.

“The pen does something that countless companies, organizations, archives, and libraries are trying to do: It bridges the digital and the physical,” suggests The Atlantic.

“The Cooper Hewitt has transformed into an organization not unlike Wikipedia, Pinterest, or, for that matter, The Atlantic: Somewhere between a media and a tech firm, it is a Thing That Puts Stuff on the Internet.”

Other interactive attractions at the museum include an immersion room that projects patterns from the wallpaper archive and invites visitors to draw their own patterns, and large social touchscreen tables designed for perusing objects in the collection (which also includes interactive features via use of the museum’s pen).