According to figures released yesterday by the International Telecommunications Union, mobile broadband accessed by tablets and smartphones is the fastest growing segment of the global information and communication technologies market. ITU’s “Measuring the Information Society” report found declining prices for mobile and fixed broadband services in addition to “unprecedented adoption of 3G,” with the number of worldwide mobile broadband subscriptions approaching two billion.

“The report found there continues to be a economic divide, with broadband uptake, fixed and mobile continuing to be limited in developing countries,” reports Broadcasting & Cable. “Some 4.4 billion people worldwide are not yet online, the report says, concluding that more action must be taken to improve accessibility and affordability.” 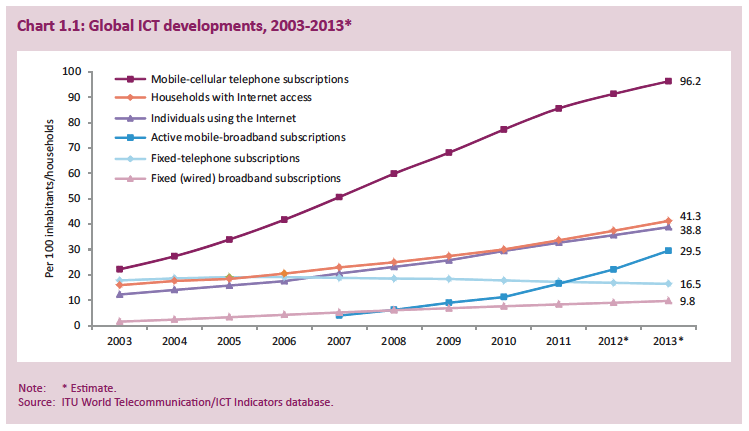 “The ITU’s information and communications technology (ICT) development index shows that the U.S. has dropped from 16 to 17 in the country ranking of various measures of development, with Korea and Sweden continuing in the top two spots and Iceland moving up from fourth to third,” notes the article.

According to ITU, two-thirds of the top nations are in Europe, where “shared regulatory framework and a clear set of priority areas, goals and targets have helped countries evolve into advanced information economies.”

Other key findings from the ITU report:

Click here to watch a webcast of the report’s launch from ITU headquarters in Geneva, Switzerland.