Just as Facebook and Twitter are doubling down on livestreaming video, Meerkat, the startup whose livestreaming app was a hit at last year’s SXSW Festival in Austin, is changing course. Chief executive Ben Rubin, who began to realize over a year ago that livestreaming wouldn’t produce the results to succeed, emailed the company’s 48 investors to explain the company’s pivot from mobile broadcast video towards video social networking. Most of the investors, he says, are supportive of the shift.

Re/code quotes Rubin’s email to investors, which says, in part, that, “mobile broadcast video hasn’t quite exploded as quickly as we’d hoped. The distribution advantages of Twitter/Periscope and Facebook Live drew more early users to them away from us and we were not able to grow as quickly alongside as we had planned.” 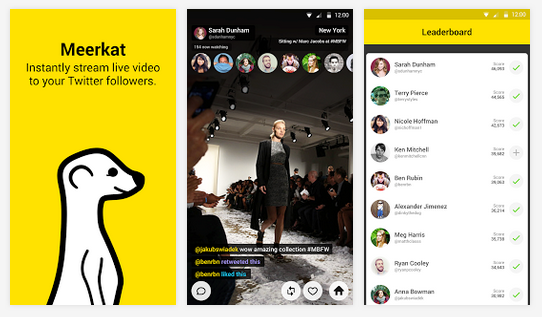 According to Rubin, Meerkat’s audience continued to grow but the number of broadcasters peaked in May last year, with one source estimating “the total number for the month at around 100,000 people.” The needle didn’t move, even after Meerkat integrated with GoPro in July. Another problem was high churn, which, Rubin believes is probably an industry-wide issue.

Rubin, who has 75 percent of his venture funding remaining, plans to move the company towards a video social network where “everybody is always live.” Although one of Meerkat’s problems was that it ran into much better funded and established competitors, its difficulty in getting and keeping users who broadcasted might also end up being a problem for those same competitors.

Both Facebook and Twitter have gotten serious about livestreaming, with the former’s COO Sheryl Sandberg trying to entice celebrities to stream and Twitter’s Periscope integrating into user feeds. Periscope chief executive Kayvon Beykpour has also been named to the Twitter executive team.

Rubin says that Meerkat “should have something in the next three months” regarding its new social network. “It’s a startup,” he said. “It’s hard. It’s going to be less hard if you’re going to be reflective on changes and understand your metrics and make decisions and be reactive… We just don’t want to be a cable TV on mobile.”