If you can’t wait until December 18 to see “Star Wars: The Force Awakens,” you’ve got a brand-new 360-degree immersive video series to enjoy. Lucasfilm’s ILMxLAB studio, partnered with Google and Verizon, just created a virtual reality experience, “Jakku Spy,” which is available on the official “Star Wars” Android and iOS apps and viewed via Google Cardboard. The VR experience puts the user in the desert world of Jakku, as a Resistance secret agent. New “vignettes” will be available every few days until the film’s debut.

“We think a lot of people are going to get to experience virtual reality in Google Cardboard for the first time with ‘Jakku Spy,’” said Rob Bredow, head of ILMxLAB and VP of new media at Lucasfilm. “It’s a great opportunity because there’s this familiar content — characters and vehicles that you’ve seen in trailers — but you’re seeing it in a completely new way.” 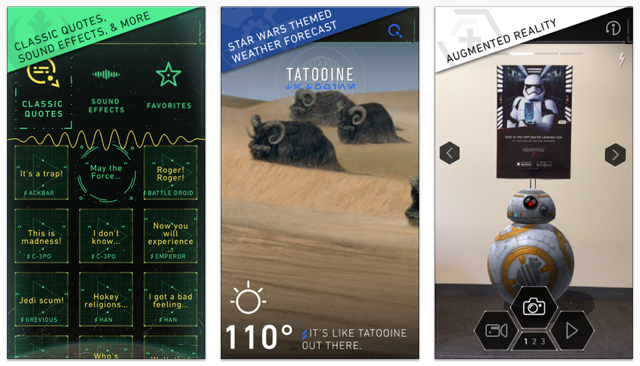 The goal, according to Bredow, is to make fans “feel like they’re in ‘Star Wars.’” The team worked with the same people making the movie, and at the same time. TechCrunch points out that, “for Google and Verizon, the tie-ins are a pretty genius way to get people to come into a physical store and take something with them that will change the way they think about seeing one of the most popular movie franchises of all time.”

In the intense rush to wring every marketing dollar out of “Star Wars: The Force Awakens” as possible, 360-degree immersive content makes sense.

“Virtual reality is nothing new, so the industry and medium will indeed weather this storm of noise and come out on the other side more relevant and better for consumers,” suggests TechCrunch.