IBM Research now claims the world’s smallest movie with “A Boy and His Atom.” The 60-second movie — certified by the Guinness Book of World Records as the world’s smallest stop-motion film — shows the story of a boy comprised of individual atoms who befriends an atom and interacts with it while playing on a trampoline made of atoms. It illustrates how scientists at IBM’s Almaden Research Lab can precisely move and manipulate individual atoms.

According to the description on the movie’s YouTube page: “The ability to move single atoms — the smallest particles of any element in the universe — is crucial to IBM’s research in the field of atomic memory. But even nanophysicists need to have a little fun. In that spirit, IBM researchers used a scanning tunneling microscope to move thousands of carbon monoxide molecules (two atoms stacked on top of each other), all in pursuit of making a movie so small it can be seen only when you magnify it 100 million times. A movie made with atoms.” 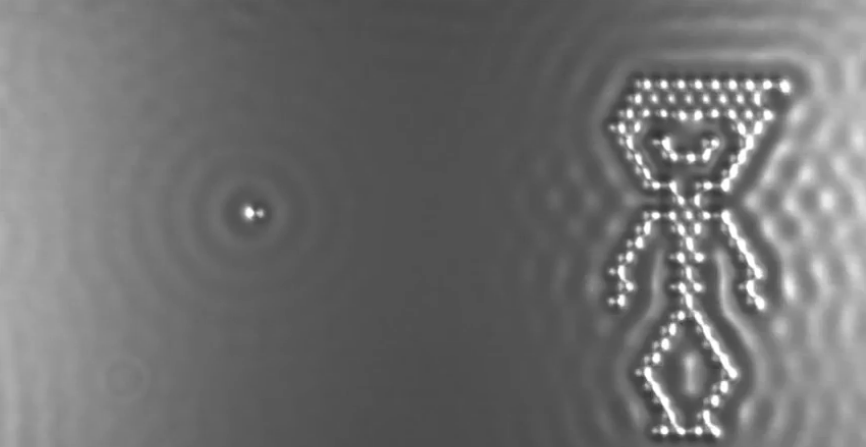 “To do it they’re using a big piece of equipment called a scanning tunneling microscope that weighs two tons and operates at a temperature of minus 268 degrees Celsius (or 450.5 degrees below zero on the Fahrenheit scale, according to the Unit Convert widget on my Mac),” writes Arik Hesseldahl for AllThingsD. “In the world of physics and nanotechnology, this thing is a big deal and led the two IBM inventors to share the Nobel Prize for Physics in 1986.”

Hesseldahl explains why IBM is creating animations using atoms: “As has long been the case, everything inside computers is getting smaller all the time. According to Moore’s law — named for Intel co-founder Gordon Moore — individual transistors on chips tend to shrink every 18 to 24 months. So does the amount of space needed to store individual bits of data. Right now, IBM says, it takes about a million atoms to do that, but it can see a trajectory leading to a point in the future to where that number can be reduced to 12 atoms. At that scale, the media to store information will be so compact that every movie ever made, including ‘A Boy and His Atom,’ could be stored on a device the size of your iPhone. That means the ability to move and manipulate individual atoms with great precision will eventually come in handy.”

To learn more about the history of the scanning tunneling microscope, check out this Atomic Short from IBM. The Made with Atoms page includes a fascinating “making of” video (also available here).