Google is integrating OpenTable’s booking service into its Maps mobile platform feature. Not only can users view turn-by-turn directions, reviews for businesses, and related photographs, but the addition will allow them to reserve a table at a restaurant from inside the application. Google has used other services in similar ways, such as displaying Uber fares, times of arrival and times to destination inside its app. The latest addition is a result of Google’s growing partnership with OpenTable parent Priceline.

“The best way to monetize Maps is to integrate commerce directly,” says Scott Jacobson of Madrona Venture Group. “The more Google can demonstrate that the [user’s] intent expressed through search or Maps is then fulfilled through an offline transaction, the more they can prove they are delivering value to a car service, restaurant, whomever.” 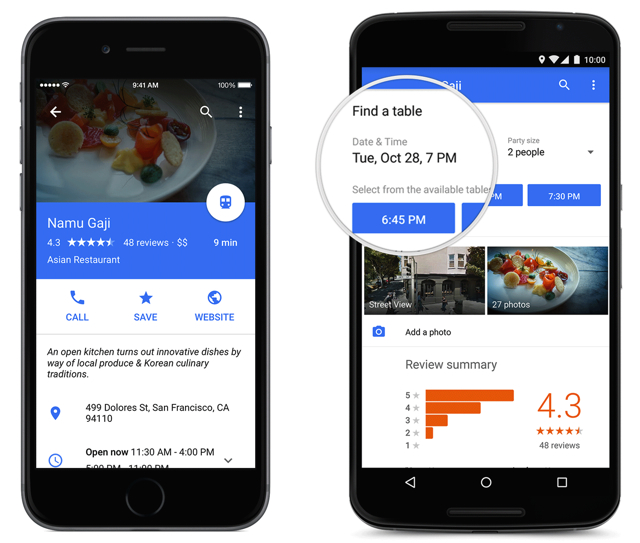 “The deal also calls attention to the growing partnership between Google and Priceline Group Inc., which acquired OpenTable in July for $2.5 billion, and which ranks among the largest buyers of Google advertising,” reports The Wall Street Journal.

In the third quarter, Priceline spent $700 million on online advertising, with Google as its largest recipient.

OpenTable and Uber do not pay Google Maps for inclusion in the app.

For more details regarding the new look and new features of Google Maps, visit the Google Maps Blog.