Google is testing a local news service as a feature or content “card” in Google Now, its intelligent personal assistant that is currently available in newer Android versions, and in the newest Google Search app for iOS. Local news is a logical addition to Google Now since the personal search assistant’s main purpose is to provide information that is “contextually relevant” to the user, based on interests, time of day, and location. 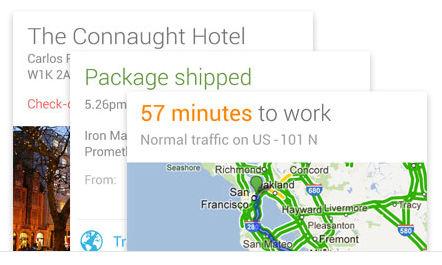 Local news is currently not available in Google Now, only as an “experimental version” among company staff. It is unclear if Google will unveil the local news as a card in Google Now to the public, although it seems likely if initial tests are deemed successful.

“One thing we’re testing right now is a very local hyper-local news card,” says Johanna Wright, vice president of search and assist at Google. “Which is really useful — it teaches me things about my neighborhood. For example, I found out Miss Mexico came to my son’s school, I saw that [the local] Chipotle was giving out burritos, and someone was stabbed in the park near my house. It’s very, very targeted to you and your interests.”

Providing a profitable local news service has been a challenge for many tech and media companies: NBC failed with EveryBlock, as did the Guardian with its Guardian Local, and AOL is struggling with Patch. Google is an aggregator of news with its Google News, and may have an edge in simply delivering news information, not reporting it.

“Putting local news in context could make it relevant in a way that simply dumping it on a site that people have to remember to go to might never,” explains Quartz. “It transforms local news into a push medium, since Google Now is constantly deciding which cards to preemptively display to people, in a process known internally on the Google Now team as ‘triggering.’”

It remains to be seen how the final version of local news will ultimately fit with Google Now and how, if at all, Google News will connect very personal and localized news to the individual user.

Related Story:
Predictive Search Knows What You Want Without You Asking, ETCentric, 7/31/13