Google Clarifies its Ad-Blocking Ban for Apps in Android Store

After a confusing period of inconsistent application of its ad blocker ban, Google just re-approved and republished Rocketship’s Adblock Fast to Google Play. The move appears to indicate that Google has reversed its earlier decision to ban ad blockers from the Google Play store. After that earlier decision was announced, Google pulled apps such as Adblock Fast, but then permitted but simply stalled updates for Crystal’s ad blocker. Google has not commented publicly on how its ad-blocker policy is evolving.

TechCrunch lays out the history of Google’s policy on apps permitted in its Android app store, noting that, at the “time of the original decision,” Google “had planned to only support mobile browsers that could block ads – including those with built-in ad-blocking features, like the Adblock Plus browser, as well as those that supported ad blocking via extensions, as with Firefox, Javelin, and Dolphin browsers.” 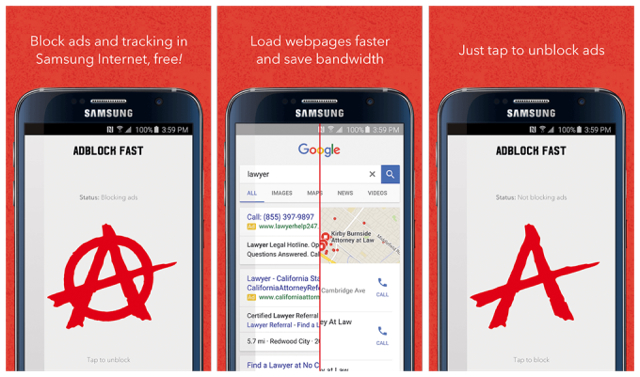 At the same time, Google apparently decided that standalone ad-blocking apps (such as Crystal and Adblock Fast) would not be permitted. When Samsung introduced ad-blocking support for its own mobile browser in early February, it allowed third-party developers to use Samsung’s Content Blocker API, to build apps that work within the browser to block ads.

According to TechCrunch, Google’s inconsistent application of its own ad-blocking policy — the ban of Adblock Fast versus the slowdown of Crystal — is indication that the company was already wavering on its own policy. Google referred to its Section 4.4 in which third party developers are told they can’t interfere with “the devices, servers, networks, or other properties or services of any third-party including, but not limited to, Android users, Google or any mobile network operator.”

Developers apparently understood that as meaning they couldn’t interfere with Samsung’s Web browser.

But Samsung’s own ad blocking API contradicted that assumption. TechCrunch says that a source at Google reports “the company will now allow those apps that integrate with one another app through authorized channels, like APIs, but will continue to prohibit apps on Google Play that interfere with the functionality of other apps in an unauthorized manner.”