Google announced it has acquired Bump, the popular mobile app that enables users to share contact info, images, videos and files by simply “bumping” mobile devices into each other. While neither company revealed specifics of the deal, a source close to the transaction told AllThingsD that Google paid between $30 and $60 million. The news comes as Apple releases its iOS 7 today, which includes a similar technology called AirDrop, a new means of wirelessly sharing files with other nearby Apple device users. 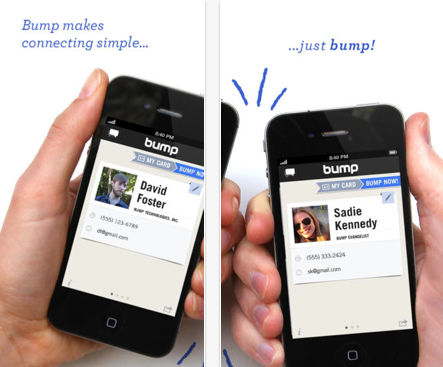 According to AllThingsD: “Bump had raised about $20 million from backers including Sequoia Capital and Andreessen Horowitz, so it was ‘not a home run,’ the source admitted.”

A related report from The New York Times adds: “Google paid about $40 million for it, two people who had been briefed on the sale said.”

“Our mission at Bump has always been to build the simplest tools for sharing the information you care about with other people and devices,” wrote Bump CEO and co-founder David Lieb on the Bump Blog. “We strive to create experiences that feel like magic, enabled behind the scene with innovations in math, data processing and algorithms. So we couldn’t be more thrilled to join Google, a company that shares our belief that the application of computing to difficult problems can fundamentally change the way that we interact with one another and the world.”

“Bump and Flock will continue to work as they always have for now; stay tuned for future updates,” he added.

“Bump is a long-established company – at least, long-established for the smartphone world – that made quite a splash with its app when it launched for iPhone and Android users in 2009,” reports Digital Trends. “The idea of ‘magically’ transferring data between handsets by just bumping them together was novel at the time. During recent fourth anniversary celebrations, the company announced the app had been downloaded 125 million times with a billion photos sent between devices.”