At GDC 2016 this week, Oculus demonstrated its retail headset with 41 games, 30 of which will launch with the Rift. The headset already has a pre-order list backed up to July, four months past its initial March 28 release. Over four generations, Rift has improved, says one journalist, although the “screen door effect” still exists in games that are heavy in fine details such as “Project CARS” and less so in games with fewer details and more abstraction. The Rift’s head tracking and overall latency was also deemed “spot on.”

AnandTech, which made the above observations, also noted that “future iterations of the Rift will ship with higher resolution displays, and… PC video card makers are already preparing for this.” Another piece of good news: the user had Rift on for “a couple of hours” without motion sickness. 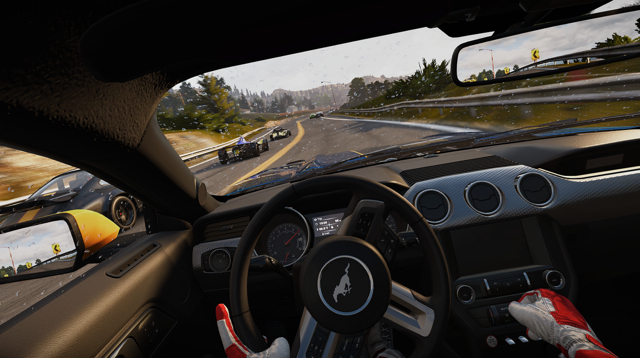 Audio, however, has room for improvement. Although the built-in supra-aural headphones are “extremely convenient,” it’s not certain “whether a set of full headphones would deliver a better experience.” Also, 3D audio implementations within games have been inconsistent. Both the Xbox One controller and Oculus’ Touch controller are “comfortable and sensible for games,” and what will work best depends on the game.

The Verge reported on some of the 30 games that will launch with the headset: “The games span genres, aesthetics, price ranges, and even physical comfort levels.” About one-third of the titles were ported from the Gear VR headset, including “hacking puzzler ‘Darknet,’ point-and-click game ‘Dead Secret,’ and cooperative bomb defusal game ‘Keep Talking and Nobody Explodes.’”

Three One Zero’s exploration game “Adrift” is quite similar to a high-budget PC or console game and will be released as a non-VR title. Racing simulator “Project CARS” (screenshot above), which was released for PCs and game consoles last year, is “the platonic ideal of a game that developers could only create shadows of before VR.”

But the best VR experiences, especially those built for Touch motion controllers, won’t come until the second half of 2016. Those include Harmonix’s VR version of the rhythm game “Rock Band,” James Bond-inspired puzzler “I Expect You to Die,” and first-person shooter “Dead and Buried.” Also coming is Ubisoft’s “Eagle Flight,” which lets the user become an eagle, soaring above a post-apocalyptic world.

“In virtual reality,” says The Verge, “there’s still no status quo — everything is up for grabs, from the genres people will enjoy to the ways we’ll interact.”