Friends Can Share, Watch Videos Together via iMessage App

For friends who want to share and watch YouTube or Twitch videos together, a new Apple iMessage app, called Let’s Watch It!, is the answer. Group chat in the iMessage App Store has proven to be a hit, with video chat app Fam raising $1.8 million and plans to expand to game-playing, interactive live masks, filters and watching videos with friends. But Let’s Watch It!, which debuted in March, may be beating Fam at its game, adding support for turning on the front-facing camera and microphone, making it even more social.

TechCrunch reports that the app was created by NEA-backed Little Labs, which built Facer, a smartwatch face app for Android Wear; mobile games for Apple Watch and iMessage games. Its iMessage game “Let’s Puck It!” now has one million users, said Little Lab co-founder Kris McDonald, which motivated the company to build more interactive apps for iMessage. Currently a free download on the app store, Let’s Watch It! works in iMessage, not on iOS. 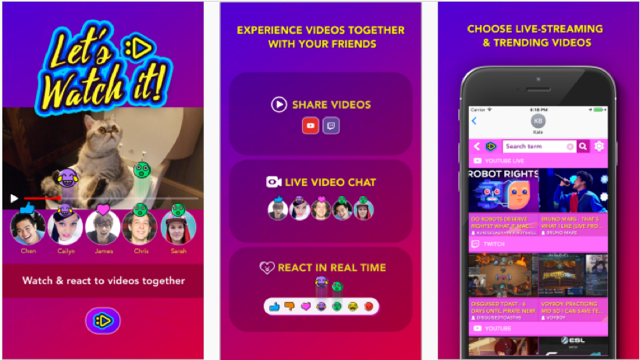 Besides “navigating the clunky iMessage App Store,” Let’s Watch It! is “straightforward to use,” with a scrollable list of popular videos and a search function for specific titles. Sharing a video is as simple as tapping it, which “places a video thumbnail into an iMessage thread.” Once everyone is in the app, they can view the video together in real-time; when a new person joins, confetti on the screen alerts the others already watching.

Usernames and icons, below the video, represent people watching. A newcomer joining the view party syncs to where everyone else is in the video, although anyone involved can rewind to the beginning.

The app offers a variety of emoji that float over the video and are seen by other viewers. TechCrunch found one glitch that it deems “a minor quirk.” “When a video finishes, the app moves on to whatever video it has queued up to auto-play next. If you then try to tap the video thumbnail you were sent in iMessage to re-watch the original video again, it doesn’t play,” but instead just restarts the autoplaying video.