A new 4K Ultra HD movie drive aimed at consumers is now on offer from WD, Western Digital’s storage company. Twentieth Century Fox Home Entertainment is partnering with WD by offering several movies and TV shows on the drive, dubbed My Passport Cinema. The drive plays back 4K/UHD, HD and HDR on Samsung SUHD TVs and a select range of other Vidity-enabled devices. Vidity is a 4K movie service backed by Warner, Universal, LG, SanDisk, Dolby, M-GO, Comcast and others in addition to Fox, WD and Samsung. 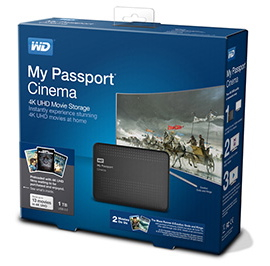 My Passport Cinema has 1 TB of storage and lists for $89.99, writes Carolyn Giardina for The Hollywood Reporter. From August 16 to June 30 next year, the drive will be a bonus giveaway with purchase of Samsung JS9000, JS9100 or JS9500 SUHD TV models.

The drive can come preloaded with Fox movies, which are unlocked after a user purchases it. Movies include “X-Men: Days of Future Past,” “Dawn of the Planet of the Apes,” “The Maze Runner,” “Exodus: Gods and Kings,” “The Wolverine,” “The Fault in Our Stars,” “Let’s Be Cops” and “The Other Woman.”

Fox is a fan of 4K combined with High Dynamic Range (HDR), says THR, which is offered by Samsung’s SUHD TVs. THR also quotes Twentieth Century Fox Home Entertainment executive Danny Kaye that, “the demand for 4K Ultra HD content continues to increase and evolve, but also the ease of content acquisition and playback on next-generation TVs and other devices. WD’s My Passport Cinema drive with Vidity technology brings together this unprecedented quality with the convenience of digital.”