FOVE, a VR Headset with Eye-Tracking, Thrives on Kickstarter

FOVE, which claims to be the only virtual reality headset with built-in eye-tracking, has surpassed its Kickstarter goal by nearly $100,000 with 37 days left to go in the campaign. A $399 donation awards backers with a headset and development kit, and FOVE plans to deliver both by May 2016. Eye-tracking not only enables users to play games by aiming their eyes, it opens the door to foveated rendering, which reduces the computational demands on real-time processing and provides contextual feedback, avatar eye-mapping, and more. 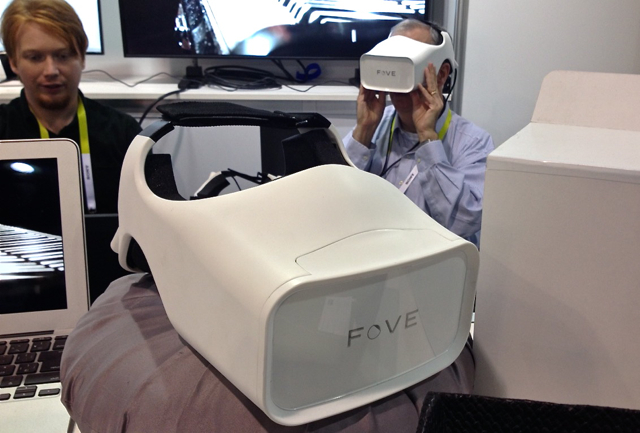 FOVE was developed by a Tokyo-based startup and first introduced at Disrupt SF 2014, where it was a finalist in the Battlefield competition, according to TechCrunch.

Companies such as Swedish-based Tobii produce eye-tracking technology for PCs to enhance interactivity, marketing, cognitive analysis and other applications, but FOVE is the first to integrate it natively into the VR experience.

Ars Technica describes foveated rendering as “a cutting-edge way of reducing the processing demands of VR headsets by generating a high-resolution image only for the immediate area that a player is looking at, allowing peripheral areas to be rendered with less definition.”

Foveation can facilitate higher resolution graphics and frame rates in PC-driven VR experiences and improve the quality of VR in smartphones, which many industry experts see as the likely vehicle for consumer adoption.

The FOVE SDK headset will sport a 5.8-inch display at 2560×1440 resolution and weigh in at 0.8 pounds, notes Ars. It will have “infrared sensors that bounce IR light off the user’s retinas, to measure the distance between the eyes and the direction they’re each pointing. The development platform will integrate content from Unity, Unreal Engine, and eventually Cryengine,” all targeting gamers, at least for the moment. Foveation is down the road.

For more information, check out the FOVE Kickstarter page.