For a year-and-a-half, Amazon has been promoting subscriptions to HBO, Starz and other streaming services. Now, it plans to expand Amazon Channels to Austria, Germany and the U.K. with between 25 to 42 live and on-demand channels from its content partners, thus offering the kind of a la carte TV that many viewers want. Apparently, the success of Channels took Amazon by surprise, and it has created two new channels — Anime Strike and Heera for Bollywood fans — while postponing plans for its own live service.

Bloomberg notes that Amazon’s $99 per year Prime subscription “is a key feature behind the online retailer’s dominance of e-commerce, offering delivery discounts, photo storage, and music and video services.” Consumer Intelligence Research Partners reports that, as of March 31, Amazon had 80 million U.S. Prime subscribers, up 36 percent from last year. 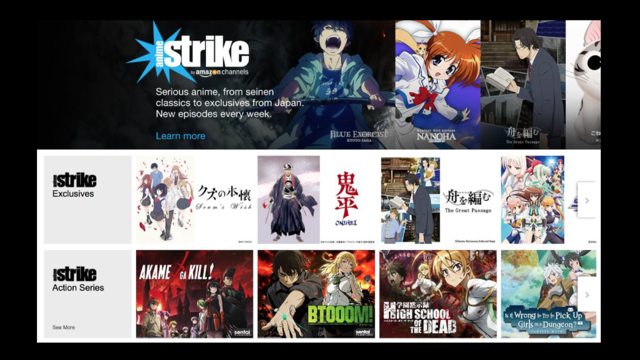 “We very much see this as the start of something big, something new for our service,” said Amazon Video managing director Alex Green, who adds that the U.S. Amazon Channels have “done very well for us.”

In Europe, Amazon Prime customers will be able to “buy channels previously available only in the U.S., such as Gaia and CuriosityStream, as well as local options.” They will be able to access the programing — which includes ITV, MGM, Discovery, Eurosport and the kids channel Hopster — on “most platforms where Amazon’s video service is already found, including Apple’s iOS, Google’s Android, game consoles and smart TVs.”

By joining Amazon Channels, content partners are dealing with a competitor, since Amazon produces original content for Prime Video, which went global in December. Amazon Channels also handles billing, “depriving companies like HBO and Starz of a direct relationship with the customer.” But the upside for partners is Amazon’s immense reach, something that’s been enticing for Up Entertainment chief executive Charley Humbard, whose UP: Faith & Family will be part of the U.K. streaming initiative.

“They have scale like nobody else,” he said. “Their power is in their relationships with Prime members. They know what Prime members buy, how they behave. They’ve created a platform that works.”

Starz chief operating officer Jeffrey Hirsch agrees. “They are spectacular at finding an audience, finding targets and selling into it,” he said. Programmers like Humbard also know that users are “ditching pay TV for on-demand options,” and “he credits Amazon with delivering a significant number of the 12 million people paying for his online service.”