Ticketing company Fandango plans to launch one of the Apple Watch’s first entertainment apps this Friday when the wearable starts its initial shipments. Similar to its mobile app, Fandango’s watch app will feature scannable movie tickets. The app also offers movie trivia and helpful screening information such as theater directions, seat details and a countdown clock to showtimes. Fandango, which developed an early iPhone app and was one of the first Passbook app partners, already has more than 36 million monthly online visitors. 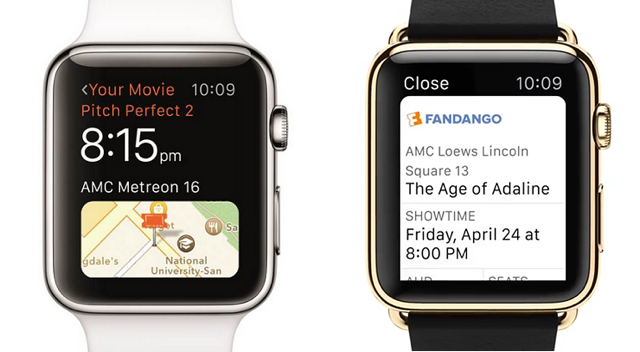 “While users won’t be able to buy tickets from their Apple Watch, this kind of integration does go a long way towards articulating what kind of real-world scenarios the Apple Watch will be useful in,” suggests The Verge. “It’s also a nice leg up on the competition: at this time, Fandango is not available on Android Wear.”

“Preorders for the highly anticipated Apple Watch opened April 10, and KGI Securities analyst Ming-Chi Kuo estimates that more than 2.3 million units already have been ordered,” notes The Hollywood Reporter. “Although that number represents a fraction of iPhone owners, it still outpaces sales of other smartwatches.”