Facebook: Impact of News Feed Seven Years After its Launch

Facebook’s News Feed feature was introduced in 2006, eventually leading to a significant shift in the Internet experience by impacting media, politics, advertising and communication. News Feed opened new possibilities for information exchange, making it more easily accessible to everyone. While some people may claim issue with making their information so available, it is the public nature of Facebook’s News Feed that has made the social media site so popular.

Facebook’s News Feed is also important in the sense that it created the model for other social media sites, including Twitter, Instagram, Pinterest, Flipboard and Quora.

“News Feed changed the media (it’s hard to imagine BuzzFeed without it), advertising, politics, and, to the extent that it altered how we all talk to one another, society itself,” suggests Farhad Manjoo of Slate in a look back at the feature’s first seven years. 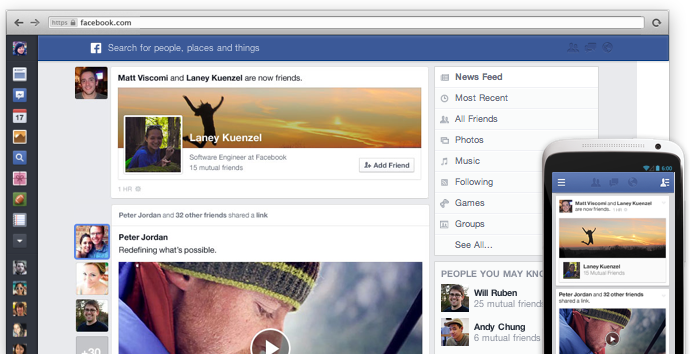 When News Feed was first introduced, Facebook announced it in a succinct blog post that in no way foreshadowed the enormous change to come. At the time, Facebook only had about 10 million active users.

“News Feed highlights what’s happening in your social circles on Facebook. It updates a personalized list of news stories throughout the day, so you’ll know when Mark adds Britney Spears to his Favorites or when your crush is single again,” wrote Ruchi Sanghvi, then a Facebook product manager, in the announcement.

Engineers thought that bringing news to everyone via News Feed made Facebook more utilitarian. “These features are not only different from anything we’ve had on Facebook before, but they’re quite unlike anything you can find on the Web,” added Sanghvi.

There were originally strong protests against News Feed, mostly over issues of privacy. However, Facebook forged ahead.

“By turning a series of lonely events into something like a story — by combining all your friends’ actions into a community, or even a conversation, on your home page — News Feed gave Facebook a soul,” comments Manjoo. “Thanks to News Feed, people started finding one another and working together in ways that had never happened on the site before.”

Over the years, Facebook has made changes to the appearance and mechanics of News Feed. “Facebook has always tried to present only a subset of the stuff people are posting — the posts it thinks you’re most likely to like,” Manjoo explains. “In its earliest incarnation, engineers tuned News Feed manually, tweaking the frequency of certain kinds of posts — more pictures, fewer news stories — in response to user engagement. Later on, they developed a more formal algorithm, sometimes called EdgeRank, which took into account broad factors about people’s relationships in deciding what showed up on your feed.”

However, EdgeRank proved to be too unsophisticated. Now, News Feed uses a machine learning approach, and “every time you load up News Feed, the new system takes thousands of factors into account to present a feed that is personalized to your tastes.” News Feed must analyze and rank about 1,500 posts each time the site is reloaded.

Facebook is also working so that News Feed can eventually recognize interests, even beyond what is shared by friends. “For instance, say you love Ricky Gervais, but none of your friends care for him,” Manjoo points out. “They aren’t likely to post anything about his new Netflix show — but given what News Feed’s ranking system knows about your interests, it should determine that you might like Willa Paskin’s review of ‘Derek’ more than you might like, say, another post about your mom’s friend’s visit to the Hamptons.”