While Facebook’s bot platform remains in its early stages as developers test potential apps and the challenges involved with natural language processing, a company named And Chill has created a movie recommendation engine that may be ideal for the social platform. Going beyond the basic like/dislike model, the new bot can be accessed through Messenger or SMS and asks each user for specific reasons why he or she likes a given movie. The information is then analyzed by And Chill to provide appropriate recommendations of similar films and links to YouTube trailers.

The bot also lets the user know whether the title is available on Netflix.

“Instead of designing for an algorithm at the outset, we designed for movie picks that would really hit home for our users,” said founder Jake Cohn, as reported by Polygon. “So far that approach has worked extremely well: 75 percent of And Chill users say their picks are spot-on.” 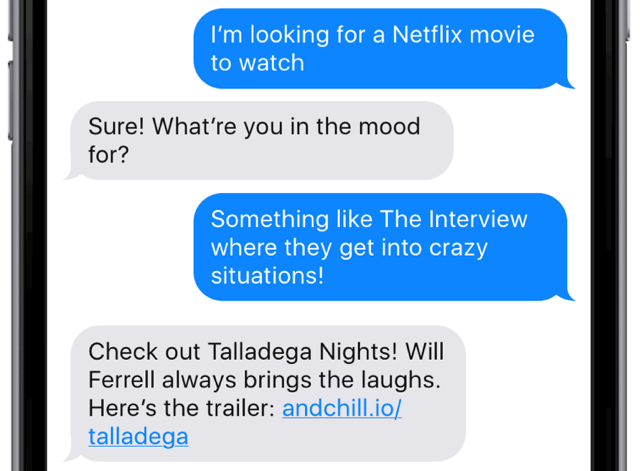 “The startup isn’t ready to give specific examples on how exactly its algorithm works, besides that it ‘uses a few different frameworks to detect patterns, attributes, and other factors’ to pull movie options for viewers,” reports Fitz Tepper for TechCrunch.

Despite the lack of details provided by And Chill regarding how the process works, Tepper described an overall positive experience. The process takes a few minutes — “because the startup noted that that some requests involve human input” — but offers “a huge leap forward from the traditional way of scrolling through a list of hundreds of movies at a time.”

The bot is still in its early stages of development, and some reviews report longer wait times. Tepper suggests that features such as synopses and Rotten Tomato scores would be helpful.