BitTorrent Live was launched for the desktop in beta last year, offering a free peer-to-peer solution for broadcasting and streaming live video, as opposed to using a single company’s servers to record video and share with viewers. Now BitTorrent says users will be able to stream live video via smartphones with a mobile app it plans to launch later this year. However, the company has yet to reveal specific platforms or whether it will allow for broadcasting, merely viewing, or both.

“Live is a peer-to-peer streaming technology that’s based on BitTorrent principles,” explains the BitTorrent Blog. “It’s built to remove bandwidth, cost, and infrastructure as barriers to streaming. It’s also designed to solve for breakage. BitTorrent Live is built for big stories. The more people that tune in, the more resilient the stream.”

While BitTorrent Live remains in beta, the company claims that it’s matured during the past year. 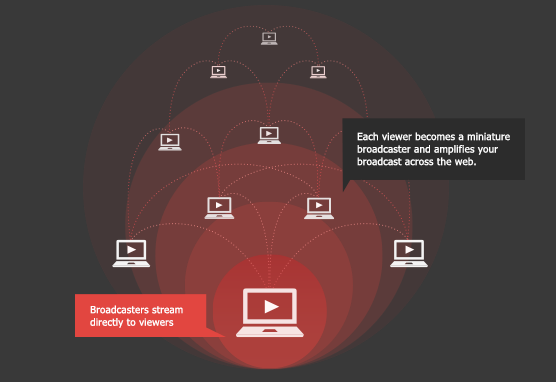 “The app too will launch in an unfinished state — an alpha, BitTorrent says — though presumably the lack of polish will be in the developing protocol and not the app itself,” reports The Verge. “When we initially tried it last year, the protocol’s reliance on a distributed network remained problematic: when there weren’t enough viewers, videos would start slowly or wouldn’t play at all. At the moment, it appears to have worked past some of those kinks and is performing much better, at least on officially featured streams.”

“For individual, small-scale broadcasters, there may be no immediate benefit to using BitTorrent over one of the many companies that offer live broadcasting for free,” The Verge adds. “But for broadcasters that want an inexpensive way to stream a lot of content — and to make money off while doing it — BitTorrent seems to be hoping that Live will be a compelling option.”

Founder Bram Cohen has suggested in the past that BitTorrent Live could provide an inexpensive option for showing ads in a stream.