The Asus Chromebit is a cigar-sized device that runs on Google Chrome OS and essentially serves as a tiny PC. It can be plugged into an LCD display or television to run software normally run on computers — including word processing, spreadsheets, email and online video. It is scheduled to launch this summer for less than $100. The Chromebit is the latest addition to a growing collection of devices designed for Chrome OS, which is based on Google’s Chrome Web browser OS, intended for use with Internet-based applications. 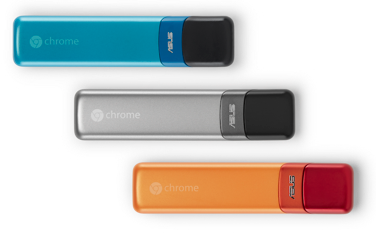 “The device is a bit like the Google Chromecast — the digital stick that plugs into your television and streams video from the Internet — but it does more,” reports Wired.

“Google pitches it as something that lets you walk up to any LCD display and instantly transform it into viable computer, whether it’s sitting on a desk in a classroom, mounted on the wall in an office conference room, or hanging above the checkout counter in a retail store or fast food joint.”

With Chromebit, Google is renewing its push of Chrome OS devices in an effort to take on Microsoft and others for the lead in business and educational software markets.

However, Google is not the only company making such a push. Intel plans to ship a similar device this month; the Intel Compute Stick will bring the Microsoft Windows OS to displays and TVs. Dell’s Wyse Cloud Connect, already available, is also similar to the Chromebit.

The devices could lead to a new trend and continued blurring of the line between PCs, TVs, and mobile devices. “With tiny, inexpensive sticks, you can transform older televisions into so-called smart TVs, streaming movies and shows from Internet services such as YouTube, Netflix, and Amazon Prime Video. But they’re also mini-PCs,” notes Wired.

“It’s another nice metaphor for the ever changing world of computer hardware. As time goes on, the distinctions will break down even further — between phone and tablet, tablet and PC, PC and television.”