Archos to Intro Smartwatches and Connected Devices at CES

It looks like Archos, maker of Android devices, will join Pebble, Samsung, Sony and others in the emerging smartwatch market when it debuts new connected devices at next week’s CES. A “Coming Soon” teaser page on the company’s website promises “Archos Smartwatches: the perfect companions for your smartphone.” And the company’s press release suggests new smartwatches will join a collection of other connected devices on display in Central Hall at the Archos booth. 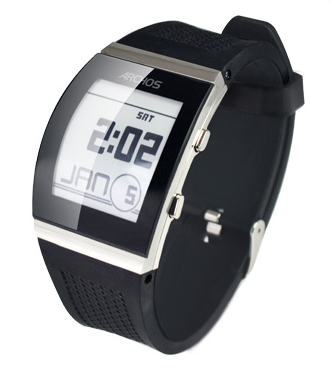 In addition to smart devices including a weather station, home camera, activity tracker and blood pressure monitor, “Archos will also be unveiling a selection of smartwatches starting at under £50,” explains the press release. (£50 is about $82 U.S.) “Archos smartwatches embrace simplicity and function, feature a Pebble-like design and will be compatible with both iOS and Android devices.”

“The strap looks like tough rubber, much like the Pebble, while the face is black and silver,” reports Digital Trends. “The shadow suggests the screen has a slight curve, which would certainly make the Archos watch stand out. There’s no indication the screen will be color, but Pebble-style, black and white e-paper instead. It may not have the visual punch of the Galaxy Gear, but it’ll help the battery last a sensible amount of time.”

Archos also announced that it will be demonstrating a collection of miniature devices designed for the smart home (see the Archos site for details). Among the products to be featured at CES: 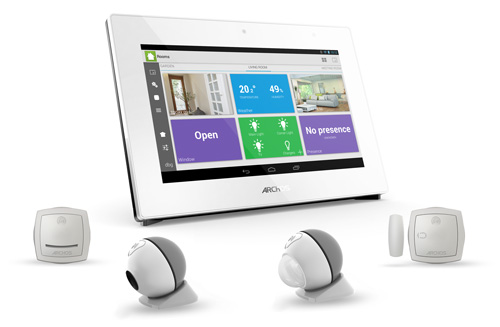 “In addition to being able to track the data via Archos’s iOS/Android app, you can also string them together to create home automation workflows,” explains Digital Trends in a related post. “Using a motion sensor and a security camera for example, you could set up an automation flow that sends you an email with a picture whenever somebody arrives at your door. And because there’s no limits on how you string them together, the number of potential functions they can perform is only limited by your imagination.”