One year after the disappointing release of its Fire smartphone, Amazon is introducing a line of low-cost devices including a new tablet and smart TV plug-ins. The Seattle-based company debuted seven new products yesterday that are slated for release by this year’s holiday season. Among the announcements: a 7-inch Fire tablet with front- and rear-facing cameras that will run for less than $50, an updated $100 Fire TV set-top box that now supports 4K, and a Fire TV stick with voice-activated wand that turns your TV into a cloud-based personal assistant. 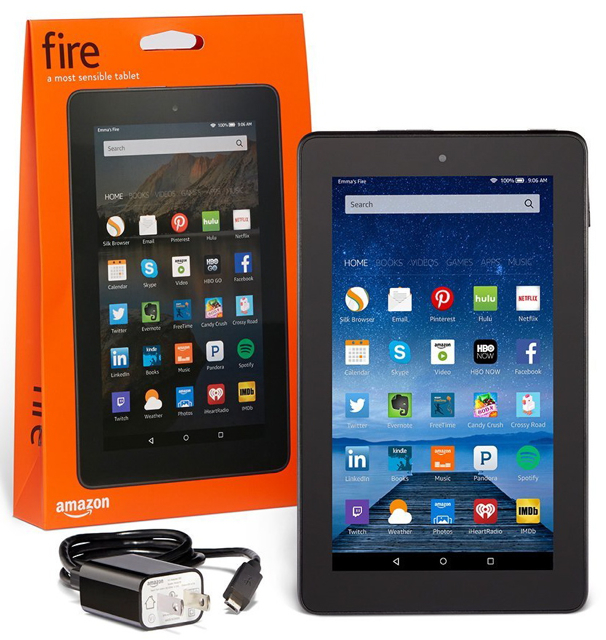 Amazon has traditionally viewed its device offerings as a means of luring loyal customers rather than a model for generating hardware profits.

“We generally price our products at break even,” said David Limp, senior vice president of Amazon devices. “Our thesis is: If customers use it, we build our profitability off of that.”

“The new devices will compete with a line-up of products unveiled last week by Apple Inc. that includes a larger iPad and a TV set-top box for watching videos and playing games,” reports Bloomberg. “While Apple increases its scope to include smartwatches and updated iPhones, Amazon’s rollout focuses predominantly on devices that enable people to watch videos, play games and read e-books.”

Amazon is bringing performance enhancements to the new Fire TV box, including “a 64-bit quad-core MediaTek processor and a GPU that’s twice as fast as the first-generation box,” according to The Verge. “It supports 802.11 AC Wi-Fi with MIMO, which is supposed to offer faster, more reliable Wi-Fi video streaming.”

Amazon hopes to leverage the fast-growing segment of sub-$100 tablets with its new 7-inch, 8GB Fire tablet. “The new tablets are available in packs of six for $250,” notes Bloomberg. “Amazon expects some customers to buy them for single uses such as keeping one in the kitchen for streaming videos and another on the nightstand as an alarm clock and e-reader.”