PC game hardware manufacturer Razer may be looking to compete with virtual headsets such as the Oculus Rift and Samsung Gear VR. At CES, the company unveiled its own VR headset, the open-source OSVR Hacker Dev Kit. According to Razer, the $199 kit is compatible with Oculus DK2 software and experimental Linux and Android VR software. Slated for June availability, the kit is tied to a new consortium that plans to offer an alternative test bed for developers interested in VR.

“Razer’s part of a larger partnership to try to wrangle all of virtual reality under one open-source roof: it’s called OSVR, or Open Source Virtual Reality Consortium,” reports CNET. “The whole OSVR umbrella aims to support software plug-ins (Unity 3D, Unreal 4 Engine and HeroEngine), input hardware (Sixsense and Leap Motion, among others) and other VR devices ranging from Oculus’ DK 2 hardware and the Totem headset from Vrvana.” 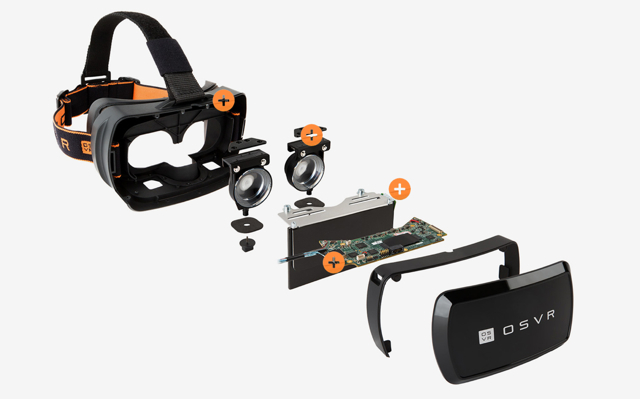 According to the OSVR site: “Built from the ground up to bring the best Virtual Reality gaming experience to the gaming world, OSVR is the one platform where all aspects of the industry — input devices, games, and output — are unified, collaborating and innovating to take Virtual Reality gaming into the next frontier.”

“This OSVR ecosystem is fully open-source, so regardless of whether you’re interested in working with hardware developmental kit designs, or software plugins for everything from motion control, to game engines, and even stereoscopic video output, you’ll have complete access to all you need.”

“The OSVR Hacker Dev Kit headset looks like an Oculus: the ski-goggle-like foam around the eyes and elastic headband snap on similarly,” notes CNET. “Inside is a swappable 5.5-inch 1,920×1,080 display and head-tracking technology much like what you’d find in the Samsung Gear VR. It has an accelerometer, a gyroscope and a compass, but no positional head-tracking tech like recent Oculus Rift kits or Sony’s Project Morpheus.”