Eight months after launching YouTube TV on smartphones, the company now has an app for smart TVs, set-top boxes, and game consoles, all of which will work with a remote. The idea, says YouTube, is that this TV service will successfully ape the traditional TV experience even as it has a native Internet feel. The focus on live TV will give the viewer something to watch immediately. Instead of icons, the user can browse through content until she finds something she wants to watch — and then start over again if she’s bored.

Wired reports that this is the experience that video on-demand simply cannot match. YouTube TV product director Christian Oestlien said that, “if you have to scroll through the home feed, and get to the bottom and go to search, and find a detail page, and then jump in, we’ve failed at our job.” In particular, he “rails against the walls of icons that face you when you open other streaming apps.” 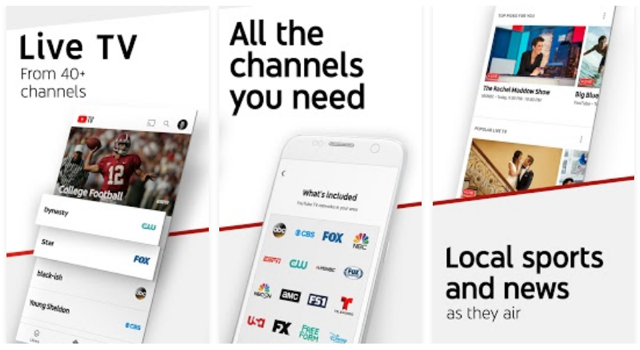 “People can’t make a decision on a piece of artwork,” he said, noting his preference instead for Top 10 lists. For YouTube TV, that list might include “the shows on right now, or the games you might want to watch, or all the movies you’ve recorded so far.”

With six months of operation behind it, YouTube TV has also expanded to different U.S. markets. “More than half of our watch time is coming from Chromecast,” said Oestlien. “On the weekends, people are casting upwards of four hours a day.”

From that bit of data, Wired concludes that, “people may like the mobile-first approach, but they want to watch TV on their TV.” Hence the YouTube TV app for smart TVs, set-top boxes and game consoles. For content providers and cablecasters, TV Everywhere has been hard to execute, with the fear of cord cutting, complicated processes and “long-lasting and short-sighted rights deals.”

YouTube saw an opportunity there, and “it’s actually begun to replace linear television for a younger generation” that watches “Pewdiepie instead of the NFL, Jake Paul over ‘Vanderpump Rules’.” YouTube TV continues to invest in original content through YouTube Red, and “philosophically … leans hard into the idea that content is just content,” even if it is “a little less polished and a lot more varied.”

To create a look for YouTube TV, the “team experimented with big channel icons and lots of metadata,” and ultimately built “a new, bolder version of YouTube Sans, the playful font YouTube released earlier this year.”

With the new font and layout, YouTube TV gives “equal oomph” to all kinds of TV content, and a search shows a mix of YouTube content with ABC and CBS shows as well as a “Related on YouTube” section. According to Wired, “it all looks the same, because to YouTube, it is all the same.”