Apple kicked off its Worldwide Developer Conference yesterday in San Francisco with a software-focused, two-hour event that highlighted the future of OS X, iOS 8, and a collection of new developer tools intended to encourage the creation of new apps. Apple’s new OS X Yosemite, with a visual overhaul inspired by iOS, will have a public beta this summer and will be available this fall. The company also announced iCloud Drive, a file system for storing documents in the cloud.

“The flat design, translucent panels, and absence of gradients and textures can be found throughout OS X 10.10, lending a much more modern look to the desktop operating system,” notes The Verge in its report of the 22 most important things announced at WWDC. 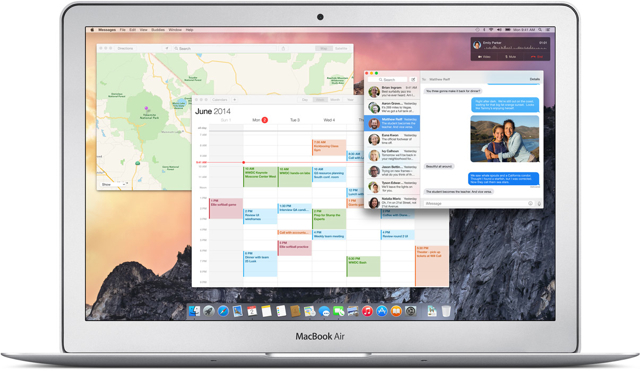 “Spotlight gets its first big update in years with a brand-new Alfred-esque launcher and a search field that appears in the middle of the screen,” the article explains. “Apple has given its Safari Web browser some radical visual and functional tweaks, first and foremost shortening the address bar at the top of the browser window and centering it.”

The Safari address bar has gotten smarter and can make Wikipedia recommendations. Drawing from its mobile version, Safari has also added a Share button and a Tab View.

“In perhaps the biggest surprise of the day, Apple announced the creation of a new programming language: Swift. Said to be significantly faster than Objective-C, Swift represents the future of development across iOS and OS X,” explains The Verge. “To enable developers to keep working on their existing apps, Swift code can live right besides C and Objective-C code in the same app.”