While products cannot be purchased at the showrooms, they can be ordered. The Winter Wonderlabs will also feature giant snow globe attractions that people can enter and record themselves in slow motion playing with the fake snow. 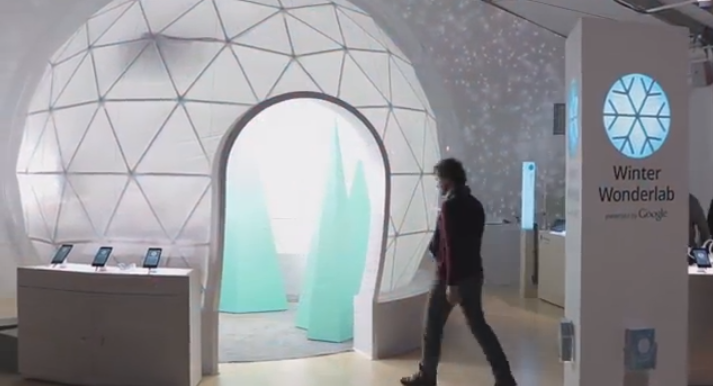 “Come chill with us,” suggests the Winter Wonderlab site. “Take a break from the mall madness and listen to music, watch videos, play games, or browse the Web.”

“The move comes as Google’s stable of products grows from smartphones to tablets, computers and more. The company is emulating a strategy blazed by Apple of enticing customers by letting them hold and try out devices,” reports Los Angeles Times. “Since Apple launched its Apple Stores, others in the tech world have followed suit, including Microsoft, Sony and Samsung.”

“The operator of the world’s most-popular search engine is investing more resources to bolster its position in hardware and joins Intel Corp. this year in rolling out showrooms to promote products,” adds Bloomberg. “Microsoft has opened almost 50 stores after Apple found success with its retail outlets, where customers can purchase iPhones, iPads and Macs and also learn more about using the devices.”