A new trend in social apps has arrived, allowing users to post anonymously, giving them a feeling of freedom without consequences for their actions on the Web. New messaging apps Whisper and Secret, for example, offer a way to share anonymous posts about anything. Popular apps such as Snapchat, Telegram and Frankly revolve around messages that self-destruct after they are read. These anonymous approaches may pose a significant threat to other social platforms such as Facebook and Twitter.

“It is a form of communication that many say more authentically mimics personal interactions in real life, where conversations are fleeting and not part of a permanent record,” reports The Wall Street Journal.

“I’m completely real on it,” says 20-year-old college student Michael Edgeworth of Whisper. “On Facebook, you have to put on a social mask. You have to be careful of what you post.”

Secret was listed in the top 20 social apps in the Apple App Store after being on the market for only a week. It is intriguing to users because it extracts contacts from a user’s phone and displays anonymous messages from their friends. This means that even though the post is anonymous, the user does know the person who posted it in some capacity. 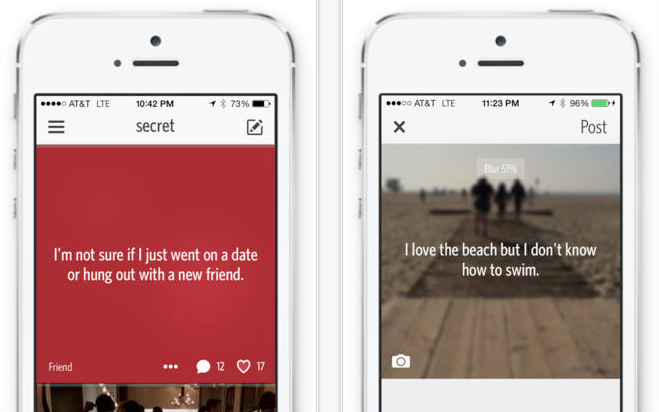 Secret also appeals to users because it allows a consequence-free existence on the Internet, whereas a bad photo or post that ends up on Google could haunt a person for life.

“Venture-capital money is pouring in, but it is far from clear whether the startups can spawn big businesses palatable to advertisers, who might be turned off by the sometimes vulgar or malicious messages streaming through the apps,” notes the article.

Critics are nervous that the anonymity involved with these services promotes bullying and inappropriate commentary, which could be unappealing to advertisers and mainstream brands.